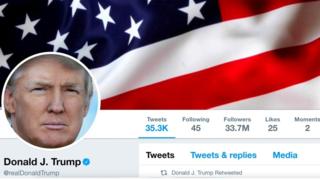 Twitter has released its most retweeted and "liked" tweets of 2017.

US President Donald Trump, whose posts on the site have become a key part of his communication strategy, hasn't even made the top 10 most retweeted or liked tweets this year.

Former President Barack Obama beat his successor with three of the most shared tweets of 2017.

The current occupant of the White House was, however, the most tweeted-about world leader though.

The social media platform's most shared tweet of the year was from a 17-year-old Nevada resident who asked US fast food chain Wendy's how many retweets he would need to get a year's worth of free chicken nuggets.

Wendy's told Carter Wilkerson he would need to get 18 million.

HELP ME PLEASE. A MAN NEEDS HIS NUGGS pic.twitter.com/4SrfHmEMo3

To date, his tweet has been shared over three million times.

The most-liked tweet of the year was from Mr Obama.

On the day of clashes at a white supremacist protest in Virginia, Mr Obama posted a photo of himself talking to multi-racial children through a window.

"No one is born hating another person because of the color of his skin or his background or his religion…" pic.twitter.com/InZ58zkoAm

Not only was this the most-liked tweet of the year, it was also the second most retweeted post worldwide.

In contrast, on the same day – 12 August – President Trump said that "many sides" were at fault for the "hatred, bigotry and violence" that occurred in Charlottesville.

Mr Obama appeared twice more in the top-10 most shared tweets of the year.

A tweet in which the former president appealed to Americans to "believe in [their] ability to create change" was the fifth most-shared globally.

Thank you for everything. My last ask is the same as my first. I'm asking you to believe—not in my ability to create change, but in yours.

This was sent out a week before the end of the Obama administration.

Ariana Grande's tweet after the Manchester Arena bombing in May was the fourth most retweeted globally.

broken.
from the bottom of my heart, i am so so sorry. i don't have words.

It was also the second most-liked post on the social media platform.

The current US president made neither the most-retweeted nor the most-shared lists this year.

Despite this, Mr Trump was both the most talked-about politician in the United States and worldwide.