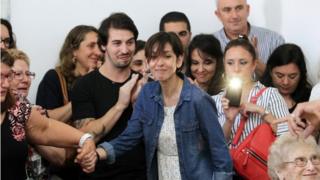 A woman taken from her mother as a newborn in Argentina has been reunited with her relatives by campaign group Grandmothers of the Plaza de Mayo.

Adriana, 40, who asked not to have her surname released, was identified after she took a DNA test.

Her DNA matched those of relatives of her parents, who disappeared under Argentina's military rule.

Adriana is the 126th child found by the Grandmothers, who campaign for victims of the "Dirty War".

Speaking at a news conference, Adriana said that when the couple who had brought her up died, she was told by someone that she was not their biological child.

"I found out on a Saturday and on the Monday I had already gone to the Grandmothers, I wanted to know if I was the daughter of people who had disappeared, more than anything because of my date of birth," she said referring to the hundreds of children who were taken from left-wing activists under military rule between 1976 and 1983.

She took a DNA test but, after four months, still no match had been found in the database the Grandmothers keep of relatives of those who disappeared or were murdered by the military regime.

"I began to think I had been abandoned, given away, sold, that they hadn't wanted me," said Adriana about her biological parents.

But on Monday she finally got a call from the National Commission for the Right to Identity (CONADI) telling her they had information they would like to give her in person.

Adriana went there straight away and was told she was the daughter of Violeta Ortolani and Edgardo Garnier.

The couple had met as engineering students in the city of La Plata, where they were also active in a left-wing student group.

Ms Ortolani was detained by the military in December 1976 when she was eight months pregnant.

Adriana was born in captivity in January 1977. Mr Garnier was detained a month later while he was searching for his missing partner and child.

Neither Violeta Ortolani nor Edgardo Garnier, who were 23 and 21 years old at the time of their detention, were ever seen again. They are two of some 30,000 people who disappeared during military rule.

Mr Garnier's mother never stopped looking for her missing grandchild and has been a key figure in the Grandmothers of the Plaza de Mayo.

She could not attend Tuesday's news conference but Adriana said she had already spoken to her by phone.

"She is beautiful inside and out and such a personality." Adriana said. "Love is stronger than hate, always."