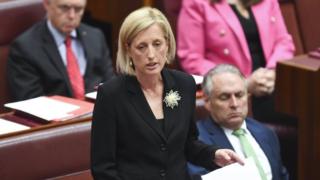 An Australian court will decide the fate of two more politicians caught up in a dual citizenship row that has already unseated nine lawmakers.

Dual nationals are not allowed to stand for parliament in Australia.

The cases of Senator Katy Gallagher and MP David Feeney, both from the Labor opposition, have been referred to the High Court of Australia.

A vote to refer eight other MPs to the court was narrowly defeated in the House of Representatives.

All politicians had a deadline earlier this week to make public disclosures about their citizenship history.

The eligibility row has ousted nine politicians since July, although one – Deputy Prime Minister Barnaby Joyce – was returned at a by-election on Saturday.

Ms Gallagher was a UK citizen when she ran for office in 2016 but argues she applied to renounce her dual status before that time. Labor said the British Home Office had taken 118 days to complete the renunciation.

Mr Feeney was unable to locate documents to support his assertion that he had relinquished UK citizenship.

Last month, all parliamentarians were told they must disclose their citizenship history – including details about parents and grandparents – on an official register.

The disclosures, finalised this week, led to speculation about the eligibility of several politicians.

On Wednesday, Labor tried to refer nine politicians – including Mr Feeney – to the court through a motion in the lower house, in a vote that was initially deadlocked at 73-all.

The motion was defeated after Speaker Tony Smith cast a deciding vote against the motion, in accordance with parliamentary tradition – a move defended even by Labor.

Mr Feeney and Ms Gallagher were referred to the court separately.

Crucially, the government had regained Mr Joyce's vote on Wednesday for the first time since his by-election.

Prime Minister Malcolm Turnbull could again lose his outright majority if a government candidate does not win another by-election on 16 December.