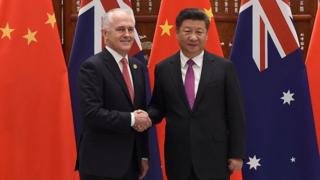 China's embassy in Canberra has sharply criticised Australian politicians and media outlets, saying they have damaged trust between the two nations.

The embassy accused some officials of "irresponsible remarks" and local media of fabricating "anti-China hysteria".

China denied that it had engaged in such behaviour and urged Australia to act in a "fair and rational manner".

"China has no intention to interfere in Australia's internal affairs or exert influence on its political process through political donations," said the statement, attributed to an embassy spokesperson.

A day earlier, Australia's Prime Minister Malcolm Turnbull noted "disturbing reports about Chinese influence" in announcing a crackdown on foreign interference, but stressed the changes were not aimed at one country.

Recent discussion about possible Chinese influence has spanned many aspects of Australian society, including politics, education and publishing.

"Those reports, which were made up out of thin air and filled with Cold War mentality and ideological bias, reflected a typical anti-China hysteria and paranoi[a]," it said.

The statement did not name specific reports. The embassy has previously been critical of an investigation by the Australian Broadcasting Corp and Fairfax Media that alleged students had been monitored for dissident behaviour.

In October, high-ranking Australian intelligence and government officials warned universities to be vigilant about the stifling of debate on campuses – remarks widely interpreted to be directed at China.

An Australian senator was demoted last week for defying his party's official position on the South China Sea dispute. It followed scrutiny over his links to a Chinese businessman.