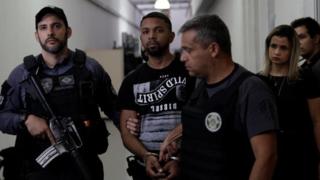 One of Brazil's most wanted men has been arrested in the city of Rio de Janeiro.

He is wanted on charges of drug trafficking, extortion and murder.

Almost 3,000 officers took part in the operation which led to his arrest. Some of them took selfies with the suspect.

Brazilian daily O Globo published the selfies, in some of which Rogerio was smiling while the officers flashed the victory sign.

Rio police also published a video of the arrest on Twitter. They said he had not offered any resistance.

Rogerio 157 made it on to the most-wanted list in September after gunmen loyal to him fought street battles with gang members of a jailed rival drugs boss in Rocinha.

The 35-year-old is said to have been given his nickname for the police code for aggravated robbery, his alleged speciality when he started out on his criminal career.

Police say Rogerio 157 formed part of a group of men who took tourists hostage in the Hotel Intercontinental in Rio in 2010. One woman was killed in the ensuing shoot-out.

Police say Rogerio 157 controlled part of the sprawling Rocinha favela, which he took over after the arrest of the drug lord known as "Nem" for whom he used to work as a bodyguard.

The security forces had been searching for Rogerio 157 for months. Almost 3,000 members of the army and various police forces were deployed on Wednesday to comb the area street by street.

Residents of Rocinha said shots could be heard in the hours after the arrests, which they attributed to a rival gang trying to move into Rogerio 157's territory.