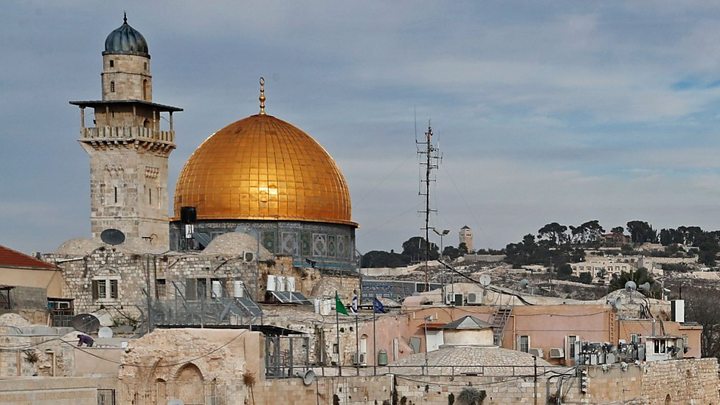 US to recognise Jerusalem as Israel's capital in world first

He is due to announce the controversial decision in a speech later.

Mr Trump is also expected to approve moving the US embassy from Tel Aviv to Jerusalem, but not for several years.

Israel welcomes the changes but the Palestinians and Arab leaders have warned they will jeopardise any Middle East peace process.

Saudi Arabia, an ally of the US, called the changes "a flagrant provocation to Muslims".

In recognising Jerusalem as Israel's capital, the US becomes the first country to do so since the foundation of the state in 1948.

The issue goes to the heart of Israel's conflict with the Palestinians, who are backed by the Arab and wider Islamic world.

Israel annexed the sector from Jordan after the 1967 Middle East war and regards the entire city as its indivisible capital.

According to the 1993 Israel-Palestinian peace accords, its final status is meant to be discussed in the latter stages of talks.

Israeli sovereignty over Jerusalem has never been recognised internationally and all countries maintain their embassies in Tel Aviv.

In recognising Jerusalem as Israel's capital, the US could reinforce Israel's position that settlements in the east are valid Israeli communities.

What is the US proposing?

Trump administration officials said recognising Jerusalem as Israel's capital was seen as "a recognition of reality" by the US government.

However, specific boundaries of the city would remain subject to a final status agreement, the official said. The status of holy sites would not be affected.

Mr Trump would also direct the state department to begin the process of moving the US embassy to Jerusalem – but this could take several years as it still has to be designed and built and security concerns would need to be addressed.

He originally promised the move to pro-Israel voters during his campaign for the presidency.

The US officials added that the president would still sign a regular waiver blocking the embassy's move from Tel Aviv to Jerusalem until the new building was completed.

Successive presidents have signed waivers to get round the 1995 Jerusalem Embassy Act, which mandates moving the embassy. They have done this so that the US can be seen as neutral in Middle East peace negotiations.

Mr Trump has vowed to pursue a peace agreement between Israelis and Palestinians, led by his son-in-law and top adviser Jared Kushner.

An administration official said the new US policy on Jerusalem was not designed to favour Israel in that process.

What has world reaction been?

Ahead of his formal announcement, Mr Trump phoned several regional leaders to inform them of the embassy move.

US government employees and their families have been barred from personal travel in Jerusalem's Old City and the West Bank for security reasons ahead of expected protests.

Israel's intelligence minister Israel Katz told Army Radio that Israel was "preparing for every option", including an outbreak of violence.

France, the European Union and the Arab League have also expressed concern.

By recognising Jerusalem as Israel's capital President Trump is fulfilling a campaign promise. There is no other obvious reason he is doing this now.

Administration officials said he would simply be acknowledging reality – that Jerusalem functions as Israel's capital. They said the decision would not determine final status issues such as boundaries and sovereignty – that is still left to negotiations.

On other core issues of the Israeli-Palestinian conflict, Arab and Muslim leaders may be able to work with changes in the US approach but Jerusalem is also holy land, not just a disputed capital.

Jordan and Saudi Arabia are custodians of Islam's holy sites and have issued strong warnings that this move could inflame the Muslim world.

There is also no indication that this is a bargaining chip to advance the peace process: according to the officials, President Trump is not expected to publicly endorse a two-state solution.

It sounds like the Palestinians will get nothing. Perhaps there is a wider strategy at work but it looks like a workaround so the president can satisfy his pro-Israel voters.