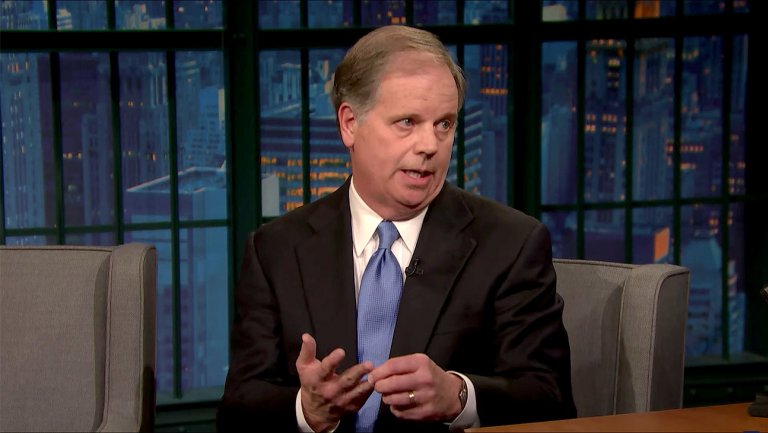 During a visit to 'Late Night with Seth Meyers,' the Alabama Senator-elect also addressed the GOP tax bill, deeming it the administration’s way of seeking a “political win.”

After congratulating Jones on his win, Meyers was quick to mention Moore and his questionable moments throughout the election, which included brandishing a gun onstage and riding a horse to vote. “It was hard to believe all the time, not just at times, it was surreal to watch some of that,” Jones said of Moore’s antics.

Keeping his comments subtle, Jones quickly transitioned the conversation elsewhere. "I mean, what can you say? What can you say?” With Meyers quipping, “It’s probably best at this point not to say anything and just move on.”

Jones did take a moment to address the sexual misconduct allegations against Moore and Trump, calling the several stories proof of a “crossroads” existing in the country.

“I think we’ve truly reached a tipping point, a crossroads in this country, where women who have been abused and who have felt abused can now stand up, speak out,” Jones explained. “That is what I have been for all along.” Although the Senator-elect admits he is focused on healthcare issues, women empowerment continues to remain of great importance. “They are. They need to stand up. They need to speak out and everybody needs to pay attention to them.”

Despite potential criticism, Jones then explained his hopes to work with the president and Republicans on tackling important issues, such as healthcare. “Well, you know, look, you’ve got to try to reach out. But it’s one of those things. They’ve got to want to work with you as well.”

Admitting that one of the issues is the recent tax bill, Jones said it was simply the administration seeking a “political win.” “Well, they were looking for a political win,” Jones said. “They’ve not seen anything really been legislatively a win for them, and they needed something by the end of the year, the president wanted something, so unfortunately the CHIP program and others just got sort of shoved to the wayside.”

He continued, “But that’s okay, despite the fact that I called on them to try to do it before the end of the year, I’m happy to get up there to work on that first thing when I get there in January,” Jones said.

Earlier in the show, Meyers had more to say about the GOP tax bill after taking a “Closer Look” at Trump's claim that he “repealed Obamacare” with the passing of the bill.

“I say we let him think he’s repealed Obamacare so he stops trying. In fact, I think this could work with all of his promises,” Meyers argued. “All we have to do is get someone to show him a photo of the Great Wall of China, tell him it’s the Mexican border, and he’ll say: ‘I did it! I did it!’ And then they will just hand him a slip of paper that says, ‘1 million pesos’ on it, and he’ll say, ‘We got Mexico to pay for it.’ And while we’re at it, we’ll bake him a cake that says, ‘Congrats on a great eight years.’ Then he’ll pack his shit and get out of our lives forever.”

IcetruckDecember 22, 2017
Like story:
tweet
Iran’s moral police storm solstice parties to arrest 230 people
More than 4 in 5 enrolled in ‘Obamacare’ are in Trump states