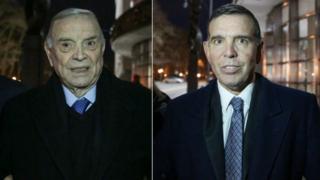 Two former top South American football executives have been found guilty of multiple charges at a US trial into corruption in the sport.

The jury in New York are still deciding the verdict in a charge against the former head of Peru's federation.

They will reconvene after Christmas to make a decision in the racketeering charge against Manuel Burga.

His lawyer declined to make a comment on the Reuters news agency.

Marin, who is also a former governor of São Paulo, was found guilty of six of the seven counts against him of money laundering and wire fraud conspiracy.

Napout, who headed the Paraguayan football body as well as the regional one, was found guilty of three charges – one of racketeering conspiracy and two wire fraud charges.

The investigation focuses on corruption around the awarding of media and marketing rights for major sporting competitions, including the Copa America. Prosecutors have said the crimes amount to an estimated $200m (£150m).

Last month, Argentine former football official Jorge Delhon killed himself after being accused of taking $2m (£1.5m) in bribes as part of the trial.

Following Friday's verdicts, football's world governing body Fifa said it "strongly supports and encourages the US authorities' efforts to hold accountable those individuals who abused their positions and corrupted international football for their own personal benefit".

The US investigation into corruption at Fifa was first revealed in May 2015.

Federal prosecutors in New York have indicted more than 40 sports and football executives linked to football in the Americas as part of the inquiry.

In October the former head of Guatemala's federation, Hector Trujillo, became the first person to be sentenced as part of the investigation.

Trujillo was sentenced to eight months in prison after pleading guilty to wire fraud and conspiracy.

Another official, Costas Takkas, former general secretary of the Cayman Islands Football Association, was sentenced to 15 months in prison by a US judge shortly after.

IcetruckDecember 22, 2017
Like story:
tweet
Tribe will move from shrinking island to farm in Louisiana
Miss America suspends CEO in email flap; more are on the way