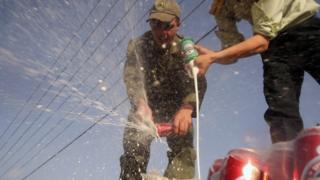 The shortest day of the year is traditionally celebrated in Iran, where it is known as Yalda.

Col Zulfikar Barfar, head of Tehran's moral-security force, said the partygoers had been drinking and dancing at the mixed parties.

Drinking alcohol can be punishable by 80 lashes, although in recent years perpetrators are often fined instead.

Police said 140 of the people were arrested in a garden in the Lavasan area, while the other 90 were attending a celebration in the northern district of Fermaniyeh,

Two singers who were performing at the events were among those detained, and some alcoholic drinks and drugs were confiscated.

Col Barfar said images from the parties had been shared on Instagram.