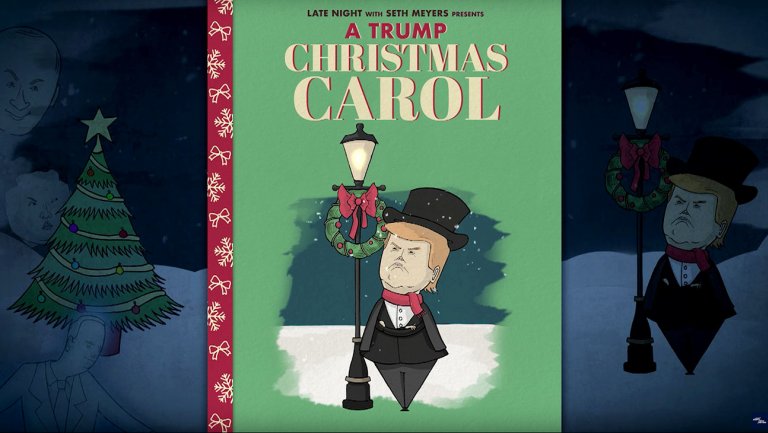 With the holidays approaching, late-night hosts Seth Meyers and Jimmy Fallon took a moment during their Thursday shows to revamp a classic holiday tale and songs with a Trump twist.

On Late Night, Meyers presented a parody of Charles Dickens' classic novel, dubbed A Trump Christmas Carol, in which a cartoon Donald Trump portrayed the novel’s Scrooge. With a narrator reading, the story depicted Trump’s Scrooge denying an employee time off to care for his sick child, choosing to instead laugh over “the idea of a sick child.”

“Not golfing on Christmas would mean having to spend it with the family, and both of his sons looked like a foot,” the narrator joked about Trump’s love for golfing.

The story continued to take subtle jabs at the president, describing the moment the Trump Scrooge was awoken in the night by his “old business partner, Vladimir Putin.” “This struck Trump as strange, as they hadn’t shared a bed in almost a year now. Luckily, since Melania sleeps elsewhere, there was plenty of room,” the narrator read.

Trump’s Scrooge was then shown waking up on Christmas morning and watching Fox & Friends praise him, something he considered a “Christmas miracle.” The president is later shown happily spending the holiday golfing.

Meanwhile, over at The Tonight Show, Fallon also had some holiday-inspired jokes about the president and the White House.

"The White House is all decorated for Christmas. And there’s a 350-pound gingerbread replica of the White House in the State Dining Room. It’s pretty realistic. There’s even a tiny Omarosa being escorted out by the Secret Service," Fallon joked, referencing the former Trump aide’s alleged dramatic firing in which she needed to be escorted off the premises.

“There’s a gingerbread White House that weighs 350 pounds, but then they left Trump alone with it for a few minutes, and now it weights 250 pounds,” Fallon jeered, before adding that Trump defended himself by saying, “I got hungry and ate the West Wing.”

The late-night host then proceeded to explain how much Trump loves classic holiday films, “He’s actually been spending time practicing lines from his favorite movies.” Fallon then presented a reel of Trump sound bites that quoted lines from classic holiday films such as Rudolph the Red-Nosed Reindeer, A Christmas Story, Elf and Home Alone.