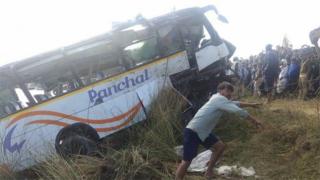 A bus with 50 people on board has plunged from a bridge in northern India, killing 33, police say.

The vehicle – reports say driven by a 16-year-old – lost control and broke through a railing before falling 30m (100 ft) into the Banas river.

It was carrying passengers in Rajasthan to the Ramdevji Hindu temple in Sawai Madhopur district, local media report.

Most of the bodies have been retrieved and the injured taken to local hospitals.

Police said the driver was among those who died and described him as an untrained minor, the Hindustan Times reported.

Most of the victims, who included women and children, had drowned, the authorities say.

Rescue services used steel cutters to extract those trapped inside the vehicle, which lay almost entirely submerged under the concrete bridge. The bus was later dragged onto the river bank.

Prime Minister Narendra Modi expressed anguish at the accident and said his thoughts were with the families of those who died.

Road accidents are frequent in India, with one taking place every four minutes.

Badly maintained vehicles, poor driving, and the state of the roads are blamed for most incidents.