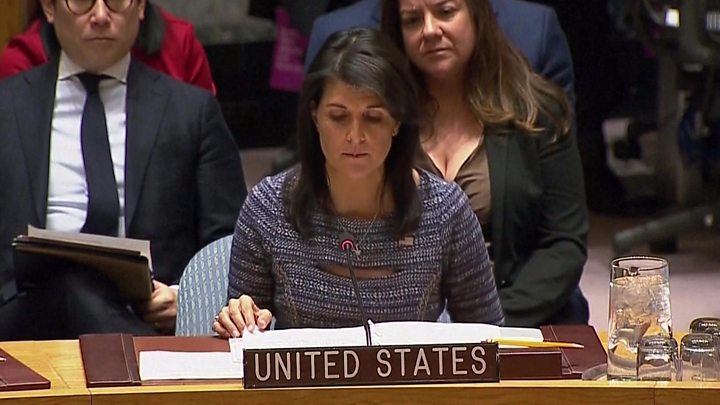 The United Nations Security Council has voted unanimously to impose tougher sanctions on North Korea in response to its recent ballistic missile tests.

The US-drafted resolution includes measures to reduce the nation's petrol imports by up to 90%.

The country is already subject to a raft of sanctions from the US, the UN and the EU.

Washington has been imposing sanctions on Pyongyang since 2008, freezing the assets of individuals and companies linked to its nuclear programme and banning the export of goods and services to the country.

The US ambassador to the UN, Nikki Haley, said the sanctions sent an "unambiguous message to Pyongyang that further defiance will invite further punishments and isolation".

US President Donald Trump welcomed the resolution. He tweeted the world wanted "peace, not death".

Chinese envoy Wu Haitao said the vote "reflects the unanimous position of the international community" on the issue of North Korea's weapons programme.

The Chinese foreign ministry described the situation on the peninsula as "complex and sensitive" and called on all sides to "exercise restraint and make active efforts to ease tensions".

What are the new sanctions?

Tensions have risen this year over North Korea's nuclear and missile programmes, which it has pursued despite pressure from world powers to stop.

The Trump administration says it is seeking a diplomatic solution to the issue, and drafted this new set of sanctions:

This is the tenth Security Council resolution imposing sanctions on North Korea.

None yet has convinced Kim Jong-un to abandon his nuclear programme, but diplomats hope this resolution will bite hard enough to change the country's path, or at the very least, restrict its ability to carry out additional nuclear and missile tests.

These strong new sanctions, passed with China's support, show the growing concern of the international community to the threat posed by Kim Jong-un.

President Trump specifically asked President Xi to cut oil to North Korea, believing it would be a pivotal step.

According to the US, North Korea imported 4.5 million barrels of refined petroleum in 2016. This resolution now caps North Korea's supply to 500,000 barrels a year – a nearly 90% cut to a vital lifeline for Pyongyang.

What sanctions are already in place?

Last month, the US unveiled fresh sanctions against North Korea which it said were designed to limit the funding for its nuclear and ballistic missile programmes.

These measures restricted oil imports and banned textile exports – an attempt to starve the North of fuel and income for its weapons programmes.

The US has been imposing sanctions on North Korea for more than a decade with little success.

In fact, North Korea has said fresh sanctions will only make it accelerate its nuclear programme. It has continued to test nuclear and ballistic missiles despite these recent examples of UN pressure: