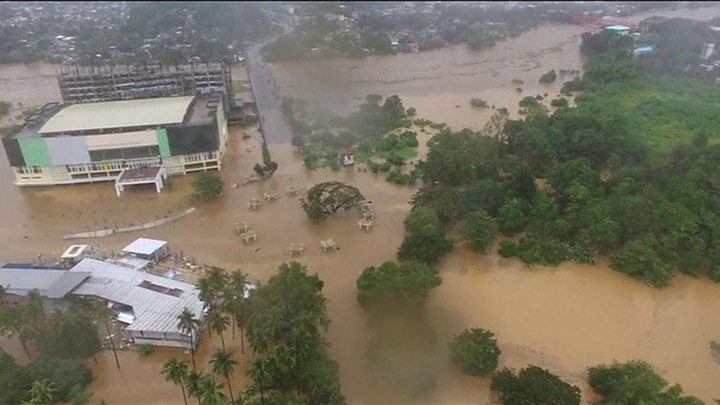 More than 180 people are reported to have been killed as a tropical storm swept through the southern Philippines, with dozens more missing.

Two towns badly hit were Tubod and Piagapo, where a number of homes were buried by boulders.

Tembin, with winds of up to 80km/h (50 mph), has passed across Mindanao and reached the resort islands of Palawan, and will now move further west.

The Philippines suffers regularly from deadly tropical storms, although Mindanao is not often hit.

Tembin, known as Vinta in the Philippines, started lashing Mindanao on Friday, with a state of emergency declared in some areas including the Lanao del Norte and Lanao del Sur regions.

Regional officials quoted by the Rappler website said there were 127 fatalities in Lanao del Norte, up to 50 in the Zamboanga peninsula and at least 18 in Lanao del Sur.

Tubod police officer Gerry Parami told the AFP news agency that there had been at least 19 deaths in the town, which is in Lanao del Norte. The remote village of Dalama was wiped out by flash floods.

"The river rose and most of the homes were swept away. The village is no longer there," he said.

He said volunteers were digging through mud to try to recover bodies in the village.

Another official told AFP that at least 10 people had died in the town of Piagapo, 10km east of Tubod.

More deaths were reported in the towns of Sibuco and Salug.

Power cuts and the loss of communication lines have hampered rescue efforts.

Andrew Morris, from the UN children's agency Unicef in Mindanao, said in some areas there were big risks for disease, particularly for children, and restoring clean water supplies would be a priority.

"Lanao del Sur province is the poorest in the Philippines, and in the past seven months there have been around 350,000 people displaced in that province because of fighting," he told the BBC, referring to battles between government forces and Islamist militants in Marawi.

"So the priority yesterday and this morning has really been to check their situation."

Storm Tembin made a second landfall on Balabac island in the Palawan archipelago and is forecast to travel west, south of the Spratly Islands, reaching southern Vietnam in about three days.

The region is still recovering from Typhoon Haiyan, which killed more than 5,000 people and affected millions in 2013.