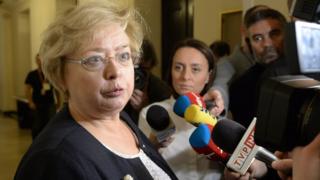 Poland's most senior judge has published an open letter accusing the conservative government of "staging a coup" against the judiciary.

It comes after the government passed controversial reforms that critics say threaten the rule of law in Poland.

Malgorzata Gersdorf said the government was walking "along the abyss" into which the whole nation might fall.

The EU recently launched unprecedented disciplinary measures against Poland because of the judicial reforms.

Poland has been given three months to address the concerns.

"The coup d'etat against the structure of one of the most important state institutions is taking place – not with armed force or paramilitary troops but by misusing legal institutions," Ms Gersdorf, the Supreme Court chief justice, said in the open letter published on Friday.

"I warn the government: do not break the social contract written in the form of the constitution. You are walking carelessly along the abyss into which the whole nation may finally fall down."

What are Poland's legal reforms?

President Andrzej Duda has signed into law two bills reforming the Supreme Court and the National Council of the Judiciary.

One allows politicians to choose members of the judiciary council, which appoints judges.

The governing conservative Law and Justice Party (PiS) says the aim is to curb corruption and the influence of the former communist elite.

But critics say the party is trying to cement its hold on power.

The other law lowers the retirement age for Supreme Court judges and would force out about 40% of those currently sitting.

What did the EU say?

At a meeting in Brussels, the European Commission – the EU's executive – decided to launch disciplinary measures, called Article 7, and asked Warsaw to:

The commission's deputy head, First Vice-President Frans Timmermans, who conducted talks with the Polish government, said there was "no other option" as the "entire structure was affected".

"After two years of trying for dialogue, of course we are frustrated that we haven't achieved what we want to, so now we're encouraging the council and parliament to support us," he said.

All member states will now be asked to decide whether Poland is violating EU standards. Such a ruling needs the backing of 22 out of the 28 states.

Any possible sanctions would only come at a later stage. But Mr Timmermans said that Article 7 could be revoked if Poland addressed the points within the three-month period.

The sanctions could lead to the suspension of Poland's voting rights at EU summits.

What was Poland's response?

The Law and Justice Party has shown no signs of backing down to the EU's demands.

Prime Minister Mateusz Morawiecki said the reforms were deeply needed and that "Poland is as devoted to the rule of law as the rest of the EU".

He added: "The dialogue between the Commission and Warsaw needs to be both open and honest. I believe that Poland's sovereignty and the idea of United Europe can be reconciled."