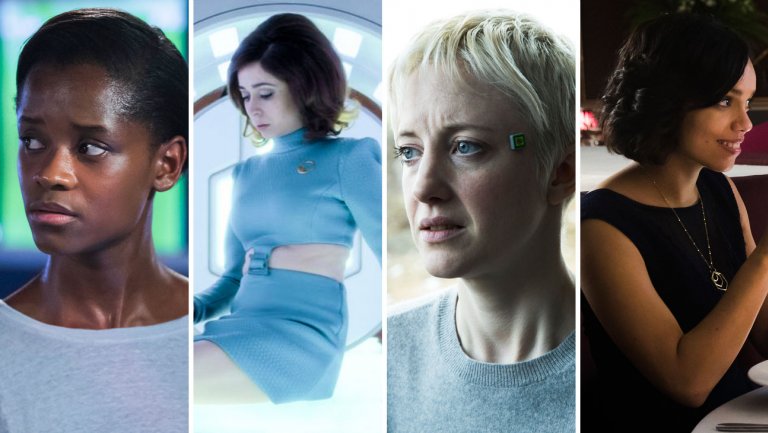 Black Mirror has often been credited with predicting the future and when the Netflix anthology returns Friday, the fourth season will be no exception. But this time, it's not some seemingly far-off technological advance or even a politicized prediction, like the rise of Donald Trump, that stands out the most. It seems Black Mirror knew its viewers could use a dose of female heroes before closing out 2017.f201

When the new cycle of Charlie Brooker's dystopian anthology launches Dec. 29, viewers will have to watch all six episodes before connecting the dots that each one stars a female protagonist. "Hero" is admittedly an odd word to use when describing a Black Mirror character, since the series traditionally welcomes vieweassrs into some version of a bleak, nihilistic world of techno-paranoia and ultimately spits them out with a devastating shock-twist. After all, not until last season's Emmy-winning star-crossed love story "San Junipero" did Black Mirror deliver its one-and-only happy ending.

And since spoiling any of the season-four episodes won't be done here, it needs to be made clear that labeling the characters as heroes in no way equates to a happy ending: their plight is what threads these women together. Whether they are survivors in the traditional sense or not, they each reach a moment in their story where they are challenged to reclaim their power, stand up to some level of tyranny and fight to write their own ending.

The Jodie Foster-directed "Arkangel" follows Brenna Harding through young adulthood after her mother (Rosemarie Dewitt) tested a parental tracking device on her when she was young; "USS Callister" flings Cristin Milioti into space, where her fleet is run by a tyrant; "Crocodile," led by Andrea Riseborough, explores how memory when advanced by technology can help to solve crimes; "Hang the DJ" is a commentary on online dating with one of the singles played by Georgina Campbell; "Metalhead" pits Maxine Peake against machine; and "Black Museum," starring Letitia Wright, contains a reference to perhaps every single Black Mirror episode within its museum of horrors ("We just opened up an Easter egg hose and fired away," creator and writer Brooker said of the story, sure to be a thrill for dedicated viewers).

But, once again, having a predominantly female slate of stars was not intentional. Especially since Brooker wrote the episodes from July 2016 through February, and long before America's sexual harassment reckoning kicked off in October with Harvey Weinstein.

In fact, the theme hadn't even occurred to executive producer Annabel Jones, who has worked alongside Brooker for the entire series, when she spoke to The Hollywood Reporter ahead of launch.

"Charlie and I don’t tend to think about the stories that way. Sometimes, it just comes out," Jones tells THR. "But it's great — great! — that they’re all strong female protagonists. I think what’s lovely about the show is that it's not a strident statement. It’s more: Why not? We don’t even think about it from a gender perspective and I hope that’s progress. It’s more that we explore the best story and the best way to tell it."

"Arkangel," the Foster-helmed episode that Brooker has called a mini-indie movie, and "Metalhead" were two stories that, to Jones, simply made sense to have a woman as the lead. "Metalhead" notched two "firsts" on the Black Mirror belt — Jones and Brooker said they planned to continue to push the unpredictability envelope this season — as the story is told in black-and-white and at just 38 minutes, clocks in as the shortest ever of the series.

"'Arkangel' just felt right that it was a single mother with a daughter. It could have been a single father, but because of the way the plot turned out, we felt stronger that it should be a female parent," she explained. As for "Metalhead," Jones says a woman was right for the lead "because it was about her nephew and her bond with her sister."

But "Crocodile" was one episode they had initially written for a man, until Riseborough (who is currently starring on the big screen in Battle of the Sexes) came in and read for the role.

"Andrea read for one of the other parts and she really liked the journey of the protagonist and she challenged us and said, 'Do you think it could be a woman?'" Jones recalls of the episode, which was directed by John Hillcoat (Triple Nine, Lawless) and filmed in Iceland. "Then we sort of said, 'Oh, hold on.' We hadn’t quite thought about that. We questioned it and worked it. Apart from the physicality element of it — a requirement that plays out in the episode's first few minutes — we thought, 'How often do you see a mother reduced to this level of desperation?' Then we thought that was actually quite interesting, and that’s the result of Andrea’s role."

In a season that heavily deals with human consciousness and one that, thanks to "Black Museum," proves once and for all that all Black Mirror episodes are synced together in the same universe, isn't it nice that universe is a progressive one? Predicting a nice world might just make the new season of Black Mirror its most twisted yet.

The fourth season of Black Mirror launches Friday on Netflix. Check back in with Live Feed for more show coverage through the weekend.