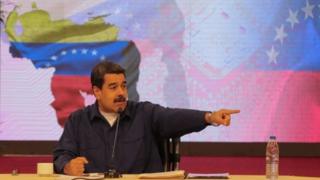 The move came days after Venezuela's decision to expel Brazil's own ambassador to Caracas, Ruy Pereira.

Canada's foreign ministry retaliated on Monday, announcing that ambassador Wilmer Barrientos Fernández, who was already abroad, would not be allowed to return.

President Nicolás Maduro described her impeachment as "a right-wing coup".

The head of Venezuela's powerful Constituent Assembly, Delcy Rodriguez, said on Saturday that "diplomatic relations with Brazil will not be restored until the government reinstates the constitutional order it has effectively broken".

The Brazilian government said the move showed "once again the authoritarian nature of President Maduro's administration".

Brazil and Canada have both become outspoken critics of Mr Maduro.

They accuse his socialist government of harassing the opposition and violating human rights.

Canada and Brazil were among many countries critical of Mr Maduro's decision to convene a Constituent Assembly, which effectively replaced the opposition-controlled National Assembly.

The opposition boycotted the poll in July and also held an unofficial referendum in which they said more than seven million Venezuelans had voted against the constituent assembly.

Mr Maduro's six-year term ends in 2019. He is due to run for re-election next year.

Venezuela has one of the world's highest inflation rates and for years has suffered from a shortage of basic goods, including medicines.

The government blames the crisis on an economic blockade led by the United States, as well as a sharp drop in the international price of oil, its main export.

IcetruckDecember 27, 2017
Like story:
tweet
5 Reasons You Need to Make 2018 Your Selfish Year
7 Habits That Train Your Brain to Make More Money