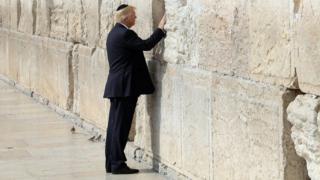 Israel's transport minister wants to dig a railway tunnel under Jerusalem's Old City and name a station next to the Western Wall after Donald Trump.

Yisrael Katz said he wanted to honour the US president for his decision to recognise the city as Israel's capital.

The Western Wall is the holiest site where Jews are permitted to pray.

The proposed new railway tunnel and station would form part of an extension of a high-speed line from Tel Aviv that is set to open next year.

Previous Israeli excavation work around the compound behind the Western Wall, known to Muslims as Haram al-Sharif (Noble Sanctuary) and to Jews as Temple Mount, has triggered Palestinian protests.

The UN cultural agency Unesco, which has designated the Old City a World Heritage site, has also expressed concern about tunnelling and excavations.

Mr Katz told the Israeli newspaper Yedioth Ahronoth that the extension of the Tel Aviv-Jerusalem line was the transport ministry's "most important national project".

He said he had approved a recommendation by an Israel Railways committee to build a 3km (2-mile) underground tunnel from Binyanei HaUma station in West Jerusalem to the Western Wall, which is in occupied East Jerusalem.

The tunnel would have two stations about 52m (170ft) below ground – "City Centre", where Jaffa and King George streets intersect – and "Donald Trump, Western Wall", near an ancient thoroughfare in the Old City's Jewish Quarter called the Cardo.

"The Kotel [Western Wall] is the holiest place to the Jewish people, and I have decided to name the train station leading to it after US President Donald Trump, in recognition of his brave and historic decision to recognise Jerusalem as Israel's capital," Mr Katz was quoted as saying.

Mr Trump's declaration earlier this month, as well as his decision to begin preparations to move the US embassy from Tel Aviv to Jerusalem, was condemned by Palestinian leaders and sparked violent protests across the occupied West Bank and the Gaza Strip.

Last week, UN member states voted decisively at the General Assembly in favour of a resolution effectively calling the US declaration "null and void" and demanding it be cancelled.

The US rejected the resolution, saying it was merely exercising its rights as a sovereign nation, and threatened to cut financial aid to countries who voted for it.

Israel regards Jerusalem as its "eternal and undivided" capital, while the Palestinians claim East Jerusalem – occupied by Israel in the 1967 Middle East war – as the capital of a future state.

Israeli sovereignty over Jerusalem has never been recognised internationally, and according to the 1993 Israel-Palestinian peace accords, the final status of Jerusalem is meant to be discussed in the latter stages of peace talks.