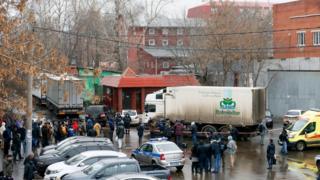 A man has opened fire in a factory in the Russian capital Moscow, killing at least one person, with reports linking the incident to a business dispute.

The suspect is the confectionery factory's former owner who claimed the business was wrongly taken from him, local media say.

The victim has been identified as the factory's security guard. Two other people were reportedly injured.

Police are still searching for the suspect, who is inside the building.

The area around the Menshevik plant in south-eastern Moscow has been cordoned off.