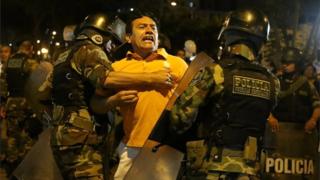 Mr Fujimori was jailed for corruption and human rights abuses before he was pardoned on Sunday on health grounds.

The move sparked riots in Lima earlier this week, and two other resignations by government politicians.

Mr Del Solar, a film director, has not publicly stated why he is quitting.

In a Twitter post [in Spanish] on Wednesday, he thanked the president for "the opportunity to serve the country".

In a press conference on Wednesday, Prime Minister Mercedes Aráoz has denied that the government did a deal with the opposition to free Fujimori in exchange for safeguarding the current president.

Fujimori, who was sentenced to 25 years in prison for human rights abuses and corruption, has severe health problems but his critics think he should have served his term in full.

They called for more protests on Thursday.

In a video published on Facebook on Tuesday, Fujimori thanked President Kuczynski, saying he was "deeply grateful".

"I'm aware that the results produced by my government were well received by some," he said

"But I recognise that I have let down others. Those I ask for forgiveness from the bottom of my heart."

He said that he fully backed President Kuczynski's call for reconciliation.

What was Fujimori convicted of?

He was convicted of authorising killings carried out by death squads.

Why was he pardoned?

A statement from President Kuczynski's office said he had granted a "humanitarian pardon to Mr Alberto Fujimori and seven other people in similar condition", without naming the others.

Doctors, the statement added, had determined Fujimori had "a progressive, degenerative and incurable illness".

Mr Kuczynski later said: "I am convinced that those of us who consider ourselves democrats cannot allow Alberto Fujimori to die in prison. Justice is not vengeance…

"My decision is especially complex and difficult, but it is my decision."

Why is the decision controversial?

Protests erupted soon after news of the pardon came to light on Sunday, with many demonstrators waving pictures of victims of the counter-insurgency campaign.

"We believe the pardon was carried out in an illegal manner," one protester told Reuters.

"The reality is that this sadly was a political agreement between the Fujimorists and the current government."

Was a deal done?

However, her brother Kenji split the conservative vote, allowing the president to stay in power and prompting the accusation that Fujimori's release had been promised in exchange.

"To save his own skin he [President Kuczynski] cut a deal with Fujimori's supporters," said leftist politician Veronika Mendoza, labelling the president's decision as treason.