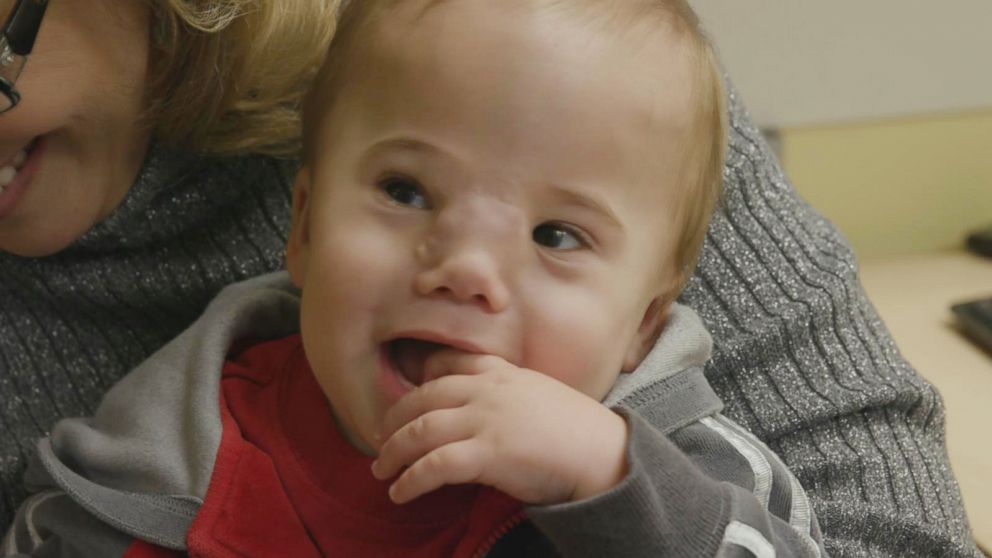 Valeka Riegel gave birth to her son, Zakary, in December of 2016. She would not see his face for the first time until April, after doctors completed a delicate and complex surgery to seal a hole in his skull that had caused a sac-like protrusion to obscure the front of his head.

“I was first told that he may have a cyst on his cheek,” said Riegel.

As it turned out, it was more than a cyst.

Zakary had what is known as a congenital bony defect in his skull. Specifically, it was a hole that allowed the fluid surrounding the brain – and even some of the brain matter itself – to escape the skull, leading to a balloon-like pouch so large it covered his face. Technically referred to as an encephalocele, it restricted his breathing, thus requiring him to stay in the neonatal intensive care unit for four-and-a-half months until he grew big enough for the surgery to correct it.

“The growth covered (his face) from his nose to his mouth and when you looked at him as a baby, all you saw was a little mouth,” Riegel said in a media interview for the Cincinnati Children’s Hospital Medical Center (CCHMC).

Riegel, herself a surgical nurse, lived by her baby son’s bedside for most of the time he was in the NICU, driving back home for her 12-hour work shifts on Fridays and weekends.

“I knew how complicated this was emotionally, physically and medically,” she told ABC News. “As a mother I was blessed with a pregnancy and was placed in a difficult position.”

Yet she held her cool until the big day. “Two hours before surgery was when severe panic set in,” she said.

Dr. Charles Stevenson, the pediatric neurosurgeon who led the team involved in Zakary’s care, said the surgery involved much more than simply revealing Zakary’s face. Essentially, doctors were faced with the challenge of removing part of the baby’s brain, closing up the hole in the skull, and ensuring that everything happened in a way that the baby would not only survive, but also have a chance at a normal life.

“There were several steps involved, including exposing the forehead, exposing the defect, amputating all that tissue, and then reconstructing a normal brain, and then reconstructing all of the normal layers or barriers which had formed a the time of development,” Stevenson said of the nine-hour procedure. One of the most delicate aspects of the operation was harvesting tissue from one section of the membrane covering the brain to close over the open hole.

The other aspect of the surgery – how Zakary would look afterwards – presented another set of challenges. Stevenson had known from the time he saw the results of a fetal MRI that Zakary would need a complex reconstruction of his face.

“I phoned a friend very quickly,” he said.

“If you’re lucky you may see one or two of these patients over the course of your career,” Pan said. For him, it was his second time, and working alongside Stevenson, he was able to deal with the cosmetic consequences of the condition even as his fellow surgeons worked on the technical hurdles of restoring the integrity of the baby’s skull.

For Riegel, it was a nerve-wracking wait. But she was pleasantly surprised when Stevenson walked out of the operating room sooner than anticipated.

“He said to me, ‘He doesn’t look like Zakary, but he still has the same beautiful smile,'” Riegel said, recalling Stevenson’s advice to her before she saw her baby’s new face. “Just look at his smile and you will see Zakary, I promise you.”

“The first thing he did after extubation was smile, and 23 hours later he was out of the pediatric ICU,” Riegel said.

Zakary will be celebrating his first birthday in the company of his mother and his two older brothers this year. Although he is behind in his verbal development, he began to crawl this December and stood up for the first time.

Riegel knows that Zakary may have a higher risk of being diagnosed with developmental disorders and seizures as he gets older, but she is focusing on the present, noting that he interacts with other children and is doing well in early intervention.

Despite the rarity of encephaloceles, the doctors remain cautiously optimistic about cases like Zakary’s.

“He seems to be attaining milestones in a time frame we would expect,” Stevenson said.