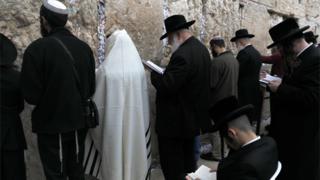 Israel's Agriculture Minister, Uri Ariel, has joined with the country's religious leaders in an attempt to use the power of prayer to end a drought.

Mr Ariel is an Orthodox Jew and led prayers on Thursday at Jerusalem's Western Wall.

Critics said the minister should tackle the crisis more practically.

Israel's drought has had a significant impact on farming communities and caused the country to become reliant on its desalination plants on its Mediterranean coast.

"We significantly lowered the cost of water, we are carrying out many studies on how to save water in different crops, but prayer can certainly help," Mr Ariel said.

The newspaper Yedioth Ahronoth wrote: "Prayer is not a bad thing, but the minister has the ability to influence [matters] in slightly more earthly ways" – such as promoting policies to reduce climate change, it suggested.