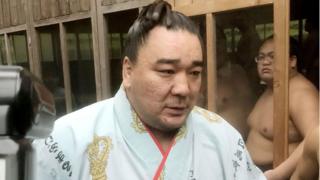 Former sumo grand champion Harumafuji has been charged with assaulting a junior wrestler in a scandal that has rocked Japan's ceremonial sport.

The 33-year-old wrestler from Mongolia has already apologised and stepped down over the incident.

He is facing a summary indictment, which means he is expected to be fined rather than tried in court.

Harumafuji's assault on fellow Mongolian Takanoiwa happened while they were out drinking with other wrestlers in a bar in the western city of Tottori in October.

The grand champion is reported to have been angered that his countryman was checking his phone while being given advice. The latter was admitted to hospital with concussion and a fractured skull.

Harumafuji admitted punching him hitting him with a karaoke remote control but denied using a beer bottle in the attack.

Harumafuji started his career in Japan at the age of 16 and was promoted to grand champion or yokozuna – sumo's highest rank – in 2012.

Takanohana is a former sumo champion himself and the JSA is expected to finalise its decision in early January, according to Kyodo.

How does sumo wrestling work?

The incident around Harumafuji follows a string of scandals in recent years.

Last year, a wrestler and his coach had to pay nearly $300,000 (£230,000) to a fellow fighter they allegedly abused so badly he lost sight in one eye, according to reports.

Several wrestlers have also been implicated in match fixing scandals and links between sumo and the mafia-like yakuza crime syndicates.

Another Mongolian grand champion retired from the sport in 2010 after reports of his involvement in a drunken brawl.

In 2007 a sumo stable-master received six years in prison after a novice was beaten to death by older wrestlers.