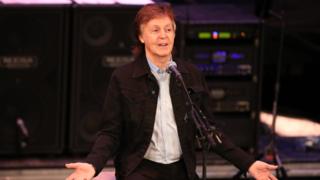 A Salvation Army leader in Australia has defended the organisation after his daughter attended a Paul McCartney concert using donated tickets.

A Beatles fan in Melbourne had given seven tickets to the charity, saying they should be used by homeless people.

Two of the passes were returned hours before the concert, so were given to a former employee, the daughter of Melbourne major Brendan Nottle.

The donor complained when he saw the unexpected guests at the concert.

He said he had been homeless himself as a young man, and wanted to "give something to people who need a lift".

Mr Nottle told Australian radio station 3AW on Thursday the two returned tickets could not be properly redistributed in time.

"[The manager] did a ring-around of other homeless people and volunteers and staff but wasn't able to move them because it was so last minute," he said.

He stressed he had no role in giving the tickets to his daughter.

She attended the show on 5 December on the understanding she would "look out for" the homeless recipients, he said.

The Salvation Army – a Christian church and one of Australia's largest charitable organisations – has apologised to Mr McDonald and will reimburse him for all seven tickets.

Mr Nottle said the charity should have contacted Mr McDonald to update him on the situation.

"We could have handled this a lot better but under the pressure of a pretty chaotic environment up there I get why it happened," he said.

"We're not Ticketmaster, we're not concert promoters. We don't do that stuff, we get it wrong sometimes."