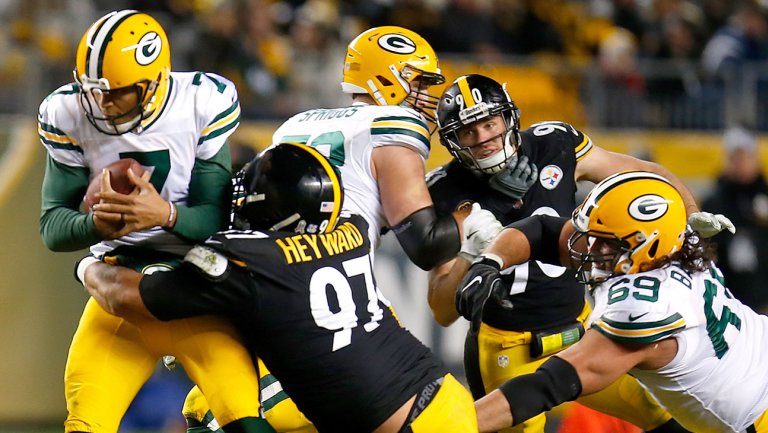 The weekly NFL matchup is still No. 1 on broadcast, but its losses outpace the league's overall TV showings.

Sunday Night Football wrapped another fall at No. 1 on the broadcast networks — but the higher they are, the harder they fall. So the NBC series was among the hardest hit of the NFL's broadcast franchises during another season of ratings declines.

The weekly telecast finished the season with an average 18.2 million viewers tuning in live and a 6.1 rating among adults 18-49. Both of those numbers represent double-digit drops from the previous year, with drops of 10 percent of its audience and 13 percent of its showing in the key demo outpacing overall 2017 declines for the league.

Sunday Night Football'sclosest broadcast rival among adults 18-49 is another NBC effort: This Is Us. The drama still trails the NFL by a healthy margin; however, with an average 5.1 rating among adults 18-49 with seven days' worth of time-shifting factored in.

The most steady primetime NFL telecast of all was Monday Night Football. Embattled ESPN's weekly NFL game retained 95 percent of its 2016 season showing among adults 18-49 with an average 3.7 rating.

Year-end averages for Sunday Night Football arrived earlier than expected with the league scrapping the planned Dec. 31 finale for this coming weekend. The game, between the Chicago Bears and the Green Bay Packers, would have been the first NFL game to air in primetime on New Year's Eve in over a decade. But the league shifted it to an earlier time slot to avoid the inevitable tune-out.

A contentious 2017 NFL season comes to an end, either way, this coming weekend. And while full ratings tallies aren't yet available, year-to-year viewership decreases have been tracking at 8 percent — concerning but less steep than the ones the NFL faced in 2016.