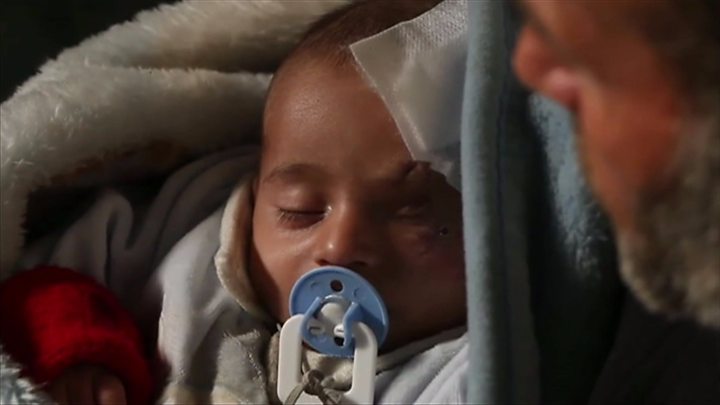 A senior UN official says he fears children waiting to be evacuated from the besieged rebel-held Eastern Ghouta area near the Syrian capital, Damascus, are being used as bargaining chips.

The UN's humanitarian co-ordinator, Jan Egeland, told the BBC he believed that rebels had agreed to free government workers in exchange for the children.

Another 12 patients were evacuated on Wednesday, following four on Tuesday.

Thirteen more urgent cases are expected to be evacuated on Thursday.

News of the latest evacuations from the Eastern Ghouta came in a tweet from the Syrian American Medical Society (SAMS), a medical relief organisation that supports hospitals in rebel-held Syria.

Update from evacuations in besieged #EastGhouta: 12 children were evacuated from the area today to receive medical care in #Damascus. Remainder of evacuations will occur tomorrow. pic.twitter.com/OgwJJLqmVq

However, SAMS advocacy manager Mohamad Katoub told the BBC that it was hard to keep up with who needed to be evacuated as people continued to die.

"The last one was a girl from the list, from the 29. This morning, when the local staff reached the family to tell them that finally the approval to evacuate your little daughter arrived, the family said that our daughter died a few days ago."

Mr Katoub also tweeted that a 13th patient had refused to be evacuated on Wednesday because he was concerned about being arrested by the Syrian government. "No safety guarantees were given to the patients," he added.

About 400,000 residents in the war-torn district have been under siege by government forces since 2013.

"Let's hope that the agreements are good when they come," Mr Egeland told the BBC.

"There can also be bad agreements. It is a not a good agreement if they exchange sick children for detainees that means children become bargaining chips in some tug of war. That shouldn't happen. They have a right to the evacuation and we have an obligation to evacuate them."

The main rebel group in the Eastern Ghouta, Jaysh al-Islam, said on Wednesday that the government had agreed to the evacuations in exchange for the release of 29 of its prisoners.

Mr Egeland said those still in the Eastern Ghouta had very little left in the way of medical facilities.

"The Syrian war has been a war against the medical profession in many ways," he said.

"Too many hospitals have been bombed, have been hit on both sides, hundreds of doctors and nurses have been killed or wounded so what is left in Eastern Ghouta for the 400,000 civilians is not that much."

The Eastern Ghouta has been designated a "de-escalation zone" by the Syrian government's main allies, Russia and Iran, along with Turkey, which backs the opposition.

But hostilities intensified six weeks ago when the Syrian military stepped up attacks in response to a rebel offensive, reportedly killing dozens of civilians.

There are also severe shortages of food, fuel and medicines, and the cold weather is threatening to worsen the hardship.

On Wednesday, the International Committee of the Red Cross (ICRC) confirmed that four critically ill people had been taken with their families to hospitals in Damascus, and that it hoped a total of 29 people would be evacuated "over the coming few days".

"The operation is clearly a positive step that will give some respite to the people in Eastern Ghouta, especially those who are in dire need of life-saving medical treatment," spokeswoman Anastasia Isyuk told the BBC.

"We hope this medical evacuation will only be the beginning of more to come, as there are many more people in need. It is also vital for humanitarian organisations to reach people in Eastern Ghouta with aid on a regular basis and without conditions."