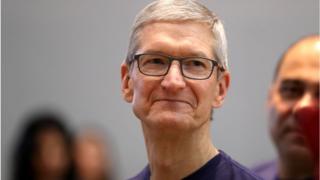 Tim Cook required to fly only by private jet

Apple's chief executive Tim Cook has been ordered by the firm to use only private jets for both business and personal transport.

In documents filed with the US markets regulator, Apple said the policy was "in the interests of security and efficiency".

His personal security expenses came to $224,216, the tech giant added.

In 2017, the chief executive's salary was just over $3m. He also received $9.3m in bonuses, plus $89m of shares that were promised to him if he met certain targets.

Apple's market capitalisation rose to $868bn in November, making it the world's most valuable publicly-traded company.

On 21 December, Apple was forced to admit that it had been deliberately slowing down ageing iPhones to help manage performance issues caused by their batteries wearing out.

The firm is being sued in eight separate cases in the US over the matter, as well as facing legal action in Israel and France.

And in November, Apple was forced to push out an update to fix a major security hole in its Mac operating system that made it possible to gain entry to a Mac without a password, and also have access to powerful administrator rights.