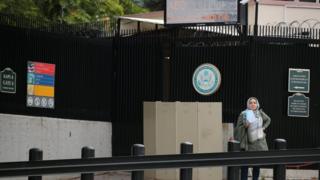 US missions in Turkey to resume full visa services after row

US missions in Turkey are to resume full visa services following security assurances from Turkey's government on US consular staff.

The US had suspended all non-immigrant visa services after the arrest of one of its consulate employees in October.

The worker had been detained over suspected links to a cleric blamed for last year's failed coup in Turkey.

The US state department said it was "confident that the security posture has improved sufficiently".

Turkey had "adhered to high level assurances" made to the US, it said.

What assurances has the US received?

The state department said the US had been assured no additional local employees of its missions were under investigation, and that staff would not be detained or arrested performing their official duties.

However, it also said it still had serious concerns about allegations against its arrested local employees and about cases against US citizens detained under the state of emergency imposed after the botched July 2016 coup.

There are at least 11 US citizens currently under arrest in Turkey.

How has Turkey responded?

The Turkish embassy in Washington welcomed the US decision and said visa restrictions for US citizens imposed since the start of the dispute would also be lifted.

However, it said Turkey had given no assurances to the US about cases being processed by Turkish courts, and that it still had concerns about Turkish nationals undergoing court cases in the US.

How did this row begin?

Washington condemned the arrest of the consulate employee, a male Turkish citizen, as baseless and damaging to bilateral relations.

The US mission in Ankara said it had suspended all non-immigrant visa services in order to "reassess" Turkey's commitment to staff security.

Turkey's embassy in Washington responded by suspending "all visa services".

It came less than a month after US President Donald Trump said the two countries were as "close as we've ever been".

But tensions had been brewing for some time, with the US complaining of heavy-handed treatment of pro-Kurdish demonstrators by Turkish security officials during Mr Erdogan's visit to Washington in May.

The Turkish embassy said Turkish-Americans who had come to see the president were provoked by the protesters.

And in September, demonstrators were beaten and ejected from a New York hotel after interrupting a speech by Mr Erdogan, who was in the city to speak at the United Nations General Assembly.

Turkey has been pressing Washington to extradite US-based cleric Fethullah Gulen over his alleged role in the botched coup in July 2016.

In the aftermath of the coup attempt, which was led by military officers, 40,000 people were arrested and 120,000 sacked or suspended.

Relations between Turkey and other countries have also become strained as Mr Erdogan appears to be taking a more assertive approach to foreign relations.