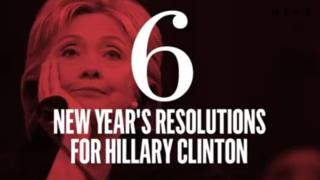 A spokeswoman for Vanity Fair magazine has apologised after it published a "humorous" video suggesting Hillary Clinton should "take up knitting" rather than run for office again.

The video has triggered numerous accusations of sexism on social media.

It is part of a series of such videos aimed at various public figures and fronted by Vanity Fair editors and writers.

In the video, staffers make a series of suggestions to Mrs Clinton, who lost the 2016 presidential election to Donald Trump, to move out of the political spotlight.

But the suggestion that attracted the greatest criticism on social media was that Mrs Clinton "take up a new hobby in the new year: volunteer work, knitting, improve comedy – literally anything that will keep you from running again".

Since the election, some commentators have complained that Mrs Clinton has been unable to assume responsibility for her role in the defeat which stunned and divided the party.

Many have called for Mrs Clinton and her supporters to move on, withdraw to the sidelines and allow the party to rebuild, say analysts.

Nonetheless, if this was meant to be a tongue-in-cheek call of that kind, many Twitter users were unimpressed.

In response, the Vanity Fair writer behind the "knitting" suggestion, Maya Kosoff, reportedly tweeted that she did not "appreciate being taken out of context to make me seem super sexist".

Other Twitter users, including Fox News, cast the Twitterstorm as "liberal outrage".

But in a later statement, Vanity Fair spokeswoman Beth Kseniak said: "It was an attempt at humour and we regret that it missed the mark."

That apology has itself been criticised by Donald Trump.

However, he was himself taken to task by commentators pointing out that Anna Wintour is the editor-in-chief of Vogue, not Vanity Fair. She is also artistic director of Conde Nast, which publishes both titles.

IcetruckDecember 28, 2017
Like story:
tweet
US missions in Turkey to resume full visa services after row
Tim Cook required to fly only by private jet