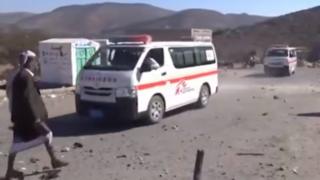 The United Nations says two air strikes by the Saudi-led coalition fighting in Yemen's civil war killed at least 68 civilians in a single day this week.

The second, in Hudaydah province, killed 14 members of the same family.

Mr McGoldrick said the incidents proved the "complete disregard for human life" by all parties to this "absurd war".

More than 8,750 people have been killed and 50,000 injured since the Saudi-led coalition intervened in the conflict between forces loyal to Yemen's government and the rebel Houthi movement in March 2015, according to the UN.

The fighting and a blockade by the coalition has also left 20.7 million people in need of humanitarian aid, created the world's largest food security emergency, and led to a cholera outbreak that is thought to have killed 2,227 people since April.

Mr McGoldrick said on Thursday that he was deeply disturbed by the mounting civilian casualties caused by "escalated and indiscriminate attacks".

Initial reports from the Office of the UN High Commissioner for Human Rights indicated that eight children were among the 54 people killed in Tuesday's strike on the "crowded popular market" in the al-Hayma sub-district of Taizz, he said.

Another six children were among the 32 people injured in the attack, which reportedly came as Houthi fighters attempted to put down a revolt by residents of al-Hayma by blockading and shelling the area.

On the same day, the air strike on a farm in al-Tuhayta district of Hudaydah province killed another 14 civilians, Mr McGoldrick said, adding that the deaths brought to 109 the total killed in air strikes in the past 10 days.

The coalition has not commented on Tuesday's incidents.

It says it never deliberately targets civilians, but human rights groups have repeatedly accused it of bombing markets, schools, hospitals and residential areas.

"These incidents prove the complete disregard for human life that all parties, including the Saudi-led Coalition, continue to show in this absurd war that has only resulted in the destruction of the country and the incommensurate suffering of its people, who are being punished as part of a futile military campaign by both sides," Mr McGoldrick said.

"As the conflict in which civilians have borne the brunt marks 1,000 days, I once again remind all parties that it has no military solution. There can only be a political solution," he added.