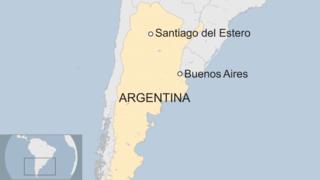 An Argentine man who fathered eight children with his daughter has been sentenced to 12 years in prison.

Domingo Bulacio, 57, was found guilty by a court in Argentina of raping his own daughter over a 20-year period.

The victim, who has not officially been named, said that he kept her as a sex slave from the age of 11.

The crimes took place in the town of Villa Balnearia in the northern Argentine province of Santiago del Estero.

Local media variously reported that the victim's mother either died or left the family when she was a child.

Two other siblings were sent away to live with other family members but the victim was forced to "take the role of her mother" when she was just 11, reports said.

She said she was raped repeatedly by her father over the next 20 years.

The victim told regional newspaper El Liberal that the abuse started at a young age..

Since reporting her father's abuse, she said she had received death threats from family members.

The case came to light at the beginning of 2016, when the woman attended a medical centre with one of her children and was asked for the father's details.

When the case was first reported to the police, Bulacio fled and it took 45 days for the police to find and detain him.

The case is similar to that of Josef Fritzl, who was convicted in 2009 of imprisoning and raping his daughter in a Austrian cellar over a 24-year period, during which time she bore seven of his children.