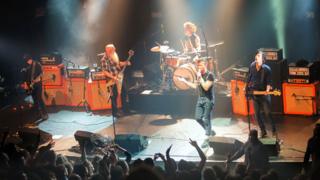 A controversial French film about the 2015 terror attack on the Bataclan music venue in Paris, which left 90 people dead, has been put on hold.

Broadcaster France 2 said the love story Ce soir-la (That Night), would be postponed until victims' associations had been "widely consulted".

Claire Peltier, whose partner David was among those killed, has called for the "scandalous" film to be shelved.

She has started a petition to block the film, attracting has 39,000 signatures.

She said it was too soon for "such a painful" story.

"We are scandalised that such a film could see the light of day so soon after such a violent event," the mother-of-two wrote.

According to Deadline, the film is understood to centre on a fictional romance between a single mother and an Afghan refugee who meet on the night of 13 November as they rescue survivors of the attacks.

France 2 said the film was still being edited, adding: "No transmission date had been fixed for the film… which has not yet been seen by the station's management."

Arthur Denouveaux, from the victims' group Life For Paris, told the Agence France Presse news agency: "Even if we have never asked for censorship, we are glad that modesty and restraint have prevailed."

US rock band The Eagles of Death Metal were performing to around 1,500 people when masked gunmen stormed the venue, firing at the band and their fans.

It was one of several co-ordinated attacks in the French capital that left 130 people dead.