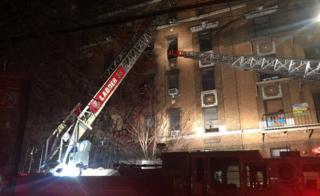 At least 12 people have been killed in a fire at an apartment building in the Bronx borough of New York.

New York City Mayor Bill de Blasio said the dead included a one-year-old child and that four other people had been critically injured.

The fire is now under control, he added. There is no word on what caused the blaze.

The building is located in Prospect Avenue, near Fordham University and the Bronx Zoo.

There were more than 160 firefighters on the scene, according to a tweet by the city's fire department.

At a news conference, Mr De Blasio said a nearby school had been set up to shelter those evacuated from the building. The city is currently experiencing bitterly cold weather.

The five-storey building contained more than 20 flats and was built just over 100 years ago, the New York Times reported.