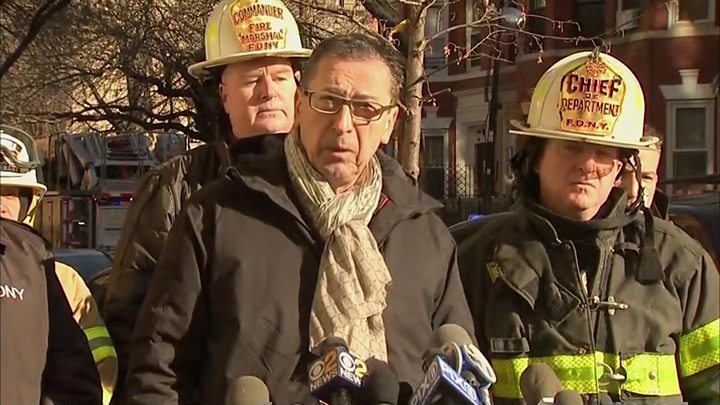 New York City investigators believe the Bronx fire that killed 12 people, including four children, was caused by a child playing with a cooker.

As the child's mother fled with her two children, she then left the door open, allowing the fire to enter the hallway.

The stairway had then "acted like a chimney" allowing the fire to spread rapidly upwards, he explained.

The fire on Thursday night was the deadliest in the city for at least 25 years, according to Mayor Bill de Blasio.

Police said that among the dead were three girls, aged one, two and seven, and a boy who had not yet been identified.

Officials have not yet released the names of any of the victims. Five victims were declared dead at the scene.

At least 20 people were rescued from fire escapes and another 12 were brought out of the building.

More than 170 firefighters helped bring the blaze under control in below-freezing weather conditions.

Local media report that two children were found dead in the arms of a woman who had been seeking shelter in a bathtub.

A US Army soldier, who was home for the holidays, is being reported missing by his family.

Emmanuel Mensah, 28, was staying on the third floor of the building, his father told the New York Daily News. He had visited four hospitals looking for his son.

Residents who did manage to escape huddled outside in the biting cold. Some fled the building without shoes or coats and the Red Cross handed out blankets to people on the street.

New York City is experiencing a severe cold snap, and temperatures dropped to around -10C (13F) on Thursday night. The water from firefighters' hoses could be seen turning to ice on the ground.

Who died in Bronx fire?

The identities of the 12 victims have begun to emerge, as family members confirm the deaths of their loved ones.

Four members of the same family have been confirmed dead by a family member.

Karen Stewart-Francis, 37, died with her two daughters and was part of a large Jamaican family living in the building, according to her mother, Ambrozia Stewart.

Her son-in-law, Holt Francis, is in hospital in a coma.

Mrs Baptise's daughter – the child's mother – is in hospital and is being treated for her injuries.

According to public records, the building has received several code violations, including for a broken smoke detector on the first floor where authorities say the fire began.

Fire officials in the city went out of their way to stress the importance of keeping doors closed during a fire, to choke it off and stop it spreading to areas with more oxygen.

They organised fire safety education seminars in the Bronx and also in Brooklyn, where a fire killed two people early on Friday morning.