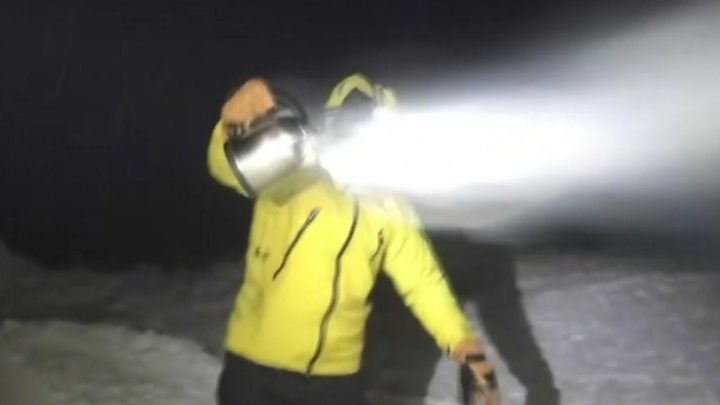 Brutal cold spell sets record lows across the US

Bitter cold continues to blanket the northern United States and Canada as forecasters warn that the deep freeze will continue into the start of 2018.

International Falls in the US state of Minnesota – the self-proclaimed "Icebox of the Nation" – saw temperatures drop to -37F (-38.3C).

Parts of Canada are colder than the North Pole or Mars, officials say.

Snow emergency in US city after huge storm

How cold is it where you are?

Check out these "cloud streets" over the #GreatLakes, seen by the #SuomiNPP satellite's #VIIRS instrument. These parallel rows of clouds are what's behind the heavy lake effect #snow hitting parts of PA, MI and upstate NY. More imagery: https://t.co/mbgRYot60A pic.twitter.com/roKtDAj9Eu

In Erie, Pennsylvania, where more than five feet (1.5m) of snow has fallen since Christmas Day, state National Guard troops have been deployed to help clear the "incredible amount" of snow.

Officials there say more snowfall is expected – and around the Great Lakes region – later this week.

Parts of upstate New York also experienced nearly five feet of snowfall, with firefighters in the town of Lorraine reporting that they were forced to dig through the snow to rescue a woman stuck inside her home.

Weather officials say that higher winds are pushing temperatures even further down.

Wind chill will make temperatures feel below 0F (-17C) in New England, as well as New York City and Philadelphia.

Officials are warning people to take measures to prevent frostbite and hypothermia by bundling up in layers of warm clothing.

Forecasters add that any exposed skin can become frostbitten in less than 30 minutes.

President Donald Trump used the cold snap to reiterate his outspoken views on climate change, suggesting on Twitter that the eastern US "could use a little bit of that good old global warming".

Mr Trump has previously dismissed global warming as a "hoax" and in June announced the US would withdraw from the Paris accord on climate change.

In the East, it could be the COLDEST New Year’s Eve on record. Perhaps we could use a little bit of that good old Global Warming that our Country, but not other countries, was going to pay TRILLIONS OF DOLLARS to protect against. Bundle up!

In Chicago, one 62-year-old man died of cold exposure after he was found unresponsive in his car, CBS reports.

In Kansas, icy conditions are being blamed for a deadly car wreck that killed four people on Tuesday.

More Arctic winds are expected to push south into the US over the weekend, which officials say may make for a chilly New Year's holiday.