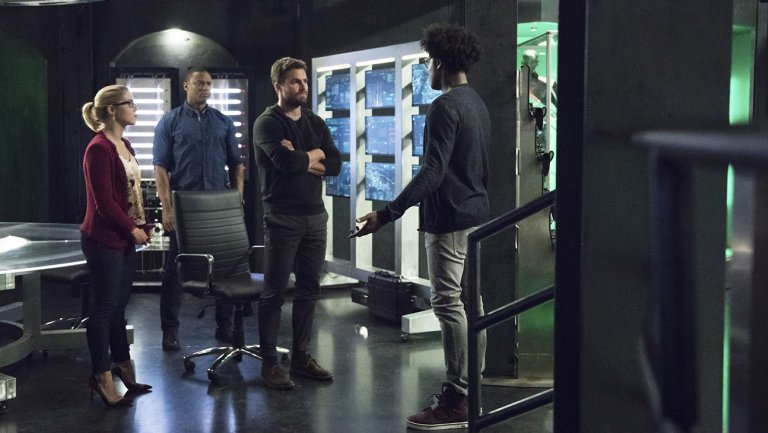 During the holiday hiatus, THR breaks down all the burning questions left over from the 'Arrow-verse' midseason finales. This week's focus is on 'Arrow.'

Welcome back to The Hollywood Reporter's weekly DC TV Watch, a rundown of all things DC Comics on TV. Every Friday, we round up the major twists, epic fights, new mysteries and anything else that goes down on The CW's Arrow, The Flash, Legends of Tomorrow, Supergirl and Black Lightning and Fox's Gotham. This week, we're asking all the burning questions left over from Arrow's midseason finale, "Irreconcilable Differences," that need answers in anticipation of its Jan. 18, 2018 return.

1. Why has Cayden James assembled a team made up of all of Oliver's worst enemies?

Cayden James (Michael Emerson) has really taken the saying "the enemy of your enemy is your friend" to heart. The criminal hacker has assembled a cabal of all of Oliver's (Stephen Amell) current enemies into one formidable team of villains. But why? And how did he get Anatoly (David Nykl), Black Siren (Katie Cassidy), Vigilante (Johann Urb) and the Dragon (Kirk Acevedo) to put aside their differences to work together? What is their end game? And does Oliver have any chance of stopping them, as he doesn't even know they're all working together?

2. Is the new Team Arrow done for good?

Making matters worse for Oliver in light of the revelation that all of his enemies have teamed up against him is the fact that his allies are dwindling. After it was revealed that Rene (Rick Gonzalez) betrayed Oliver and was planning to testify against him for the FBI, Oliver pushed the other newbies away. Curtis (Echo Kellum) and Dinah (Juliana Harkavy) both quit Team Arrow as a result of Oliver and Felicity (Emily Bett Rickards) not trusting them and putting them under surveillance. Now it's back to the Original Team Arrow of Oliver, Felicity and Diggle (David Ramsey). Is this shake-up permanent? And without her old team and no one else to turn to, Dinah went back to her ex Vigilante. Does that mean she's about to get corrupted and swept up into the villain team?

3. Is there hope for redemption for Black Siren?

Perhaps there's a chance for the heroes to shake things up for Cayden's team, however. Black Siren disobeyed Cayden's direct orders and didn't kill Quentin (Paul Blackthorne), instead letting him go free. She even opened up to him about her own father issues. Does this mean there's a chance for redemption for her after all? Can she be wooed to Team Arrow? Or was that just a moment of weakness?

Now that Thea (Willa Holland) has finally woken up from her coma, things seem to be getting back to normal for the former Team Arrow member. But there has to be some lasting consequences from her time unconscious, if not medically then psychologically or emotionally, right? How has she been affected by her coma? What is the series planning on doing with her character?

5. What does Roy Harper's return mean for the team?

It was recently announced that Colton Haynes will be returning to Arrow for a mini arc later this season to reprise his role of Roy Harper. He first appears in episode 15 "to help resolve an urgent matter with high stakes for the team. His short visit turns into something surprising when he reunites with Thea and sparks a change in both of their lives that will have long-lasting consequences." Is this the romantic reunion Thea was hoping for at Oliver's wedding? Is Roy returning only to have to Thea exit the series? Arrow hasn't been able to figure out how to use her character for the past few seasons, even resorting to putting her in a half-year coma following the Lian Yu explosion. If Roy's return has anything to do with Thea's future on the series, brace for a possible exit.

6. What's going to happen with the FBI case against Oliver?

With Rene set to testify that Oliver is the Green Arrow, does Oliver have any other options other than serious jail time? Will someone swoop in at the last moment with a Hail Mary to save Oliver? Will Rene go through with his testimony? What will this mean for the series if Oliver is convicted as a murderer and vigilante?

7. How many failed engagements has Dinah had?

In an offhand comment at Oliver and Felicity's wedding reception, Dinah revealed that she's had multiple failed engagements of her own. That's right: multiple. The new Black Canary has always been a pro at keeping her personal details under wraps. But this whopper of a truth bomb is going to need to be explored further. How many hearts has Dinah left broken in her wake?!

8. How long will Arrow have to wait to bring back Deathstroke?

In the push and pull between DC's films and TV shows, TV tends to suffer more. Every time a DC film decides to use a character, no matter if that character has already been on one of the Arrow-verse shows for years, the TV series has to pull back. It's happened in the past on Arrow with Deathstroke (Manu Bennett) and then Task Force X aka the Suicide Squad. And now it's happening once more with Deathstroke. Because the film version was introduced in the stinger scene of Justice League (with Joe Manganiello donning the villain's mask), Bennett won't be seen on Arrow for the foreseeable future. Speaking at a recent ACE Comic Con, executive producer Marc Guggenheim revealed that Arrow has to pull back on using the DC Comics character for now. "These are DC’s characters; we’re just renting them," he said. "We use the characters that they tell us we can use when we can use them, and we work around whatever limitations that places us … For a time they were saying, ‘You can’t use Deathstroke,' and that changed and we were able to have Slade Wilson back on the show. Now we’re back to ‘You can’t use him.' They’re working on the feature-film version." Given that Arrow left Deathstroke's future open-ended in the first half of this season, how long will this new Deathstroke ban last?

Gotham airs Thursdays on Fox. Supergirl airs Mondays, The Flash and Legends of Tomorrow air Tuesdays, Arrow airs Thursdays and Black Lightning will premiere Tuesday, Jan. 16, all on The CW.