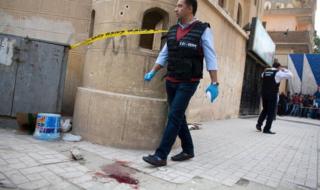 Twelve people have died in twin attacks on Coptic Christians in the Helwan area south of Cairo, officials say.

Ten people died when gunmen tried to storm a church south of Cairo, but were intercepted by police.

About an hour later, a Coptic-owned shop in the same area was attacked, leaving two dead.

More than 100 Christians have been killed in Egypt in the past year – most attacks claimed by the local branch of the so-called Islamic State group.

Security forces have put checkpoints in place around the capital in response to the attacks.

They announced plans earlier this week to protect festivities around the New Year and, on 7 January, Coptic Christmas. They include the deployment of rapid-reaction forces and jamming equipment.

They approached the men, who began firing.

At least three police officers were among the 10 dead, but it was not clear how many civilians died or whether the toll included the dead attacker. There are reports that several people were wounded, two critically.

An explosives belt was found on the dead assailant – suggesting an even more deadly attack was planned, our correspondent says. It was safely defused.

The other gunman escaped but was reportedly later arrested with weapons, ammunition and a bomb.

Following this attack reports came in of another shooting in the same area. In a statement on its Facebook page, the Egyptian Coptic Orthodox Church said the two dead were owners of the household appliances shop that was targeted.

Egypt's Copts have in the past accused authorities of only token gestures to protect them and these incidents will not help calm tensions, our correspondent says.

Last April at least 45 people died in twin attacks on Coptic churches in Alexandria and the Nile Delta city of Tanta. At least 29 Copts were killed on a bus en route to a monastery in central Egypt in May and a Coptic Orthodox priest was stabbed to death in Cairo in October.

The attacks have been blamed on, and in many cases claimed by, Islamists affiliated with so-called Islamic State (IS).