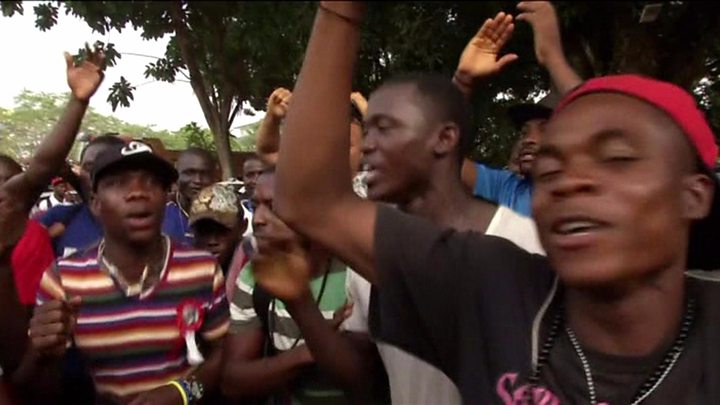 With nearly all ballots from Tuesday's run-off vote counted, Mr Weah is well ahead of opponent Joseph Boakai with more than 60% of the vote.

As news of Mr Weah's victory emerged, his supporters began celebrating in the capital Monrovia.

"My fellow Liberians, I deeply feel the emotion of all the nation," Mr Weah wrote on Twitter after the results were announced.

"I measure the importance and the responsibility of the immense task which I embrace today. Change is on."

Who is George Weah?

Mr Weah, who was raised in a slum in Liberia's capital Monrovia, starred at top-flight European football clubs Paris St-Germain (PSG) and AC Milan, before ending his career in England with brief stays at Chelsea and Manchester City.

He is the only African footballer to have won both Fifa World Player of the Year and the prestigious Ballon D'Or.

He entered politics after his retirement from the game in 2002 and is currently a senator in Liberia's parliament.

We knew George Weah way before he became President-elect of Liberia ?? ???
Congrats to the PSG and world football legend on the latest chapter of his brilliant career!!! pic.twitter.com/19sYefLzZg

Liberia, founded by freed US slaves in the 19th Century, has not had a smooth transfer of power from one elected president to another since 1944.

Mrs Sirleaf defeated Mr Weah in the presidential election run-off in 2005 and took office a year later, after the end of a brutal civil war that saw President Charles Taylor forced out by rebels. Taylor is now serving a 50-year prison sentence in the UK for war crimes related to the conflict in neighbouring Sierra Leone.

This time Mr Weah's campaign – under the Coalition for Democratic Change banner – appealed to the youth vote, while incumbent Vice-President Boakai was seen as old and out of touch.

But Mr Weah's election is not without controversy, as his running mate was Jewel Taylor, former wife of the jailed president.

The biggest trophy of his life

Hundreds of jubilant supporters of George Weah took to the streets shortly after the electoral commission chairman announced the result.

Election observers, both domestic and foreign, have praised the conduct of the election and say it showed a marked improvement from the first round in October.

This is third time lucky for a man used to winning trophies but who found it hard to win this, the biggest award of his life. And he has his work cut out for him.

Liberia has stabilised in the past decade after a long and bloody civil war. But it is still struggling with acute poverty and corruption. From producing Africa's first elected female president, now it has produced its first ex-footballer head of state.

Mr Weah, 51, won the first round of the presidential election in October with 38.4% of the vote, compared with the 28.8% won by second-placed Mr Boakai, 73. The failure of any candidate to secure an outright majority forced the run-off.

The National Elections Commission (NEC) said on Thursday that with 98.1% of the run-off vote counted, Mr Weah had won 61.5% of the vote while Mr Boakai was far behind with 38.5%.

Turnout was low – put at 56% by election officials – for the vote, which had been delayed from its initial date, 7 November, following a legal challenge brought by a representative for the opposition Liberty Party, Charles Brumskine.

Mr Brumskine said the first round vote – which he came third in – had been marred by "massive fraud and irregularities", but in December the Supreme Court ruled evidence of fraud was insufficient to merit a re-run of the opening round.

Election observers have praised the conduct of the poll.