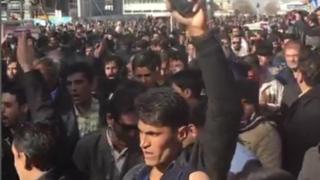 Anti-government demonstrators have taken to the streets of Iran for a second day, with protests being held in a number of cities.

The protesters have been angered by rising prices and corruption.

Large numbers have reportedly gathered in the western city of Kermanshah, with a smaller demonstration in the southern city of Shiraz.

The biggest protest on Thursday was in the north-eastern city of Mashhad, where there were 52 arrests.

The governor-general of the capital, Tehran, said no permits had been issued for public demonstrations.

He said such gatherings would be firmly dealt with by the police, who are out in force on main intersections.

Videos posted on social media purport to show clashes between security forces and some demonstrators in Kermanshah on Friday.

A number of cities in north-eastern Iran held protests on Thursday. They started with anger at the inability of the government of President Hassan Rouhani to control prices – the cost of eggs has doubled in a week.

However, some developed into broader anti-government protests, calling for the release of political prisoners and an end to police beatings.

There were also chants in Mashhad of "not Gaza, not Lebanon, my life for Iran", a reference to what protesters say is the administration's focus on foreign policy rather than domestic issues.

The arrests in Mashhad were for chanting "harsh slogans", officials said.

A BBC Persian investigation has found that Iranians, on average, have become 30% poorer in the past ten years alone.

Many believe Iranian leaders are spending money that should be used to improve their lot on war efforts abroad. Billions are also being spent on spreading religious propaganda and Shia Islam around the world.

The head of Mashhad's revolutionary court, Hossein Heidari, said: "We consider protest to be the people's right but if some people want to abuse these emotions and ride this wave, we won't wait and will confront them."

President Rouhani promised that the deal he signed with world powers in 2015, which saw Iran limit its nuclear activities in return for the lifting of international sanctions, would boost economic growth.

The economy has risen out of recession and inflation has been reduced, but businesses are still struggling from a lack of investment and the official unemployment rate is 12.4%.