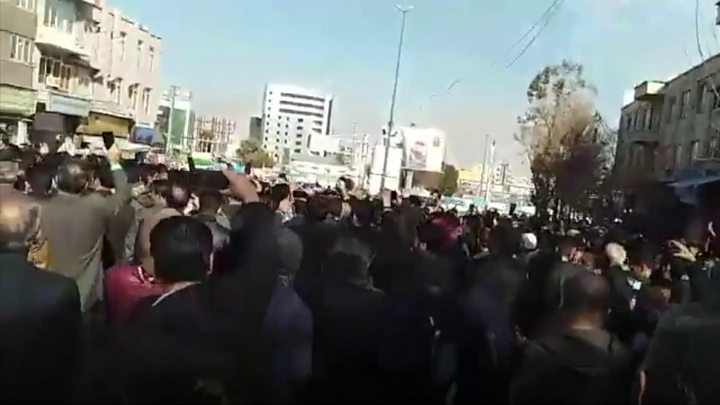 Anti-government demonstrations that began in Iran on Thursday have now spread to several major cities.

Large numbers reportedly turned out in Rasht, in the north, and Kermanshah, in the west, with smaller protests in Isfahan, Hamadan and elsewhere.

The protests began against rising prices but have spiralled into a general outcry against clerical rule and government policies.

A small number of people have been arrested in Tehran, the capital.

They were among a group of 50 people who gathered in a city square, Tehran's deputy governor-general for security affairs told the Iranian Labour News Agency.

The US State Department condemned the arrests and urged "all nations to publicly support the Iranian people and their demands for basic rights and an end to corruption".

How did the protests start?

The demonstrations began in the north-eastern city of Mashhad – the country's second most-populous – on Thursday.

The protests spread to other cities in the north-east, and and some developed into broader anti-government demonstrations, calling for the release of political prisoners and an end to police beatings.

On Friday, despite warnings from authorities, the demonstrations spread further to some of the biggest cities in the country.

They represent the most serious and widespread expression of public discontent in Iran since mass protests in 2009 that followed a disputed election, correspondents say.

What are people complaining about?

What began as a protest against economic conditions and corruption has turned political.

Iran's Fars news agency, which is close to the elite and powerful Revolutionary Guards security force, reported that many protesters who turned out over economic grievances decided to leave rallies after others yelled political slogans.

President Rouhani promised the 2015 nuclear deal that Iran signed with world powers would boost the economy. However despite the lifting of international sanctions, the unemployment rate is 12.4%.

How big are the protests?

Demonstrations of varying sizes are reported to have occurred in at least seven cities.

How have the authorities reacted?

Videos posted on social media appear to show clashes between security forces and some demonstrators in Kermanshah.

Fars news agency reported that protesters there destroyed some public property and were dispersed.

The governor-general of Tehran said that any such gatherings would be firmly dealt with by the police, who are out in force on main intersections.

A BBC Persian investigation has found that Iranians, on average, have become 15% poorer in the past 10 years alone.

Many believe that money that should be used to improve their lives is being spent by Iran's leaders on conflicts in Syria, Yemen and Iraq. Billions are also being spent on spreading religious propaganda and Shia Islam around the world.