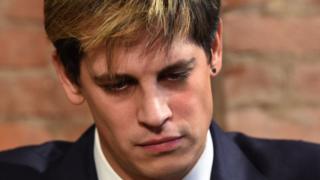 Writer Milo Yiannopoulos has hit back after his former editor's comments on his unpublished memoir emerged online.

Mitch Ivers' withering notes – such as "unclear, unfunny, delete" – were seen in court documents after Mr Yiannopoulos sued the publisher.

Simon & Schuster cancelled his book in February when footage emerged of him appearing to condone paedophilia.

The alt-right provocateur has now accused Mr Ivers of flirting with him and being biased against his work.

Mr Yiannopoulos went on to self-publish the autobiography.

His critics have mocked him online for the highly critical editorial feedback.

Other comments from Mr Ivers included:

When Mr Yiannopoulos accused feminists of being "more desperate to be noticed than Kanye West at an awards show", Mr Ivers had a choice response: "This is what people say about you."

Mr Ivers' scathing remarks were made public when lawyers for Simon & Schuster filed them in court in response to Mr Yiannopoulos's July lawsuit.

The writer alleges breach of contract after deal was cancelled in February.

Read more about this:

"Mitchell Ivers, the liberal gay editor Simon & Schuster put in charge of neutering its edgier conservative authors, hates Republicans and thinks they are all virulent homophobes. He told me so himself," Mr Yiannopoulos claimed in a statement on social media.

"Ivers said one thing in manuscript edits, but quite another when he was giggling and flirting with me …. I look forward to prevailing in court."

Mr Ivers has not responded to the allegations.

In July 2016, Milo Yiannopoulos was banned from Twitter for what the social media company referred to as "inciting or engaging in the targeted abuse or harassment of others".

It came after he took aim at Leslie Jones, a black actress in an all-female Ghostbusters reboot, and she received a barrage of abuse from other Twitter users.

He has also been widely criticised for comments he has made about transgender people, Muslims, Black Lives Matter activism, feminists and gay people, even though he is openly gay.

IcetruckDecember 29, 2017
Like story:
tweet
Ringo Starr will be knighted 2 decades after Paul McCartney
WATCH: Flu season is getting worse and fast: CDC