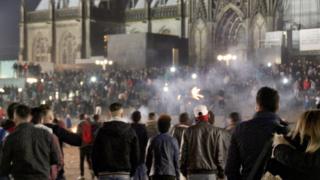 Organisers of Berlin's New Year's Eve celebrations are to set up a "safe zone" for women for the first time.

The new security measures planned for the Brandenburg Gate party come amid concerns about sexual assaults.

Hundreds of women reported being attacked by gangs of men with migrant backgrounds.

The events in Cologne heightened tensions in the country over the large influx of refugees and migrants – 1.1m people arrived in Germany in 2015, some, but by no means all, fleeing violence in Syria and Iraq.

Hundreds of thousands of people are expected to attend the New Year's Eve party in Berlin on Sunday and security will be strict. Large bags, such as rucksacks, and alcoholic drinks will be banned at the Brandenburg Gate.

Women who have been assaulted or feel harassed will be able to get support at a special "safety zone", staffed by the German Red Cross, on Ebertstrasse.

The city's police have also issued advice to women, encouraging them to seek help if they feel threatened and to carry a small bag with no valuables.

Cologne officials set up a "security point", staffed by social workers and psychologists, at the city's 2016 carnival following the New Year's Eve attacks.

But the idea of a special safe zone for women at large public events has not been welcomed by everyone.

Critics say it does not tackle the perpetrators of sexual violence, while some others complain it is discriminatory.