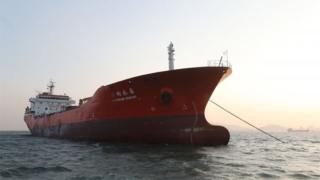 South Korea has revealed it seized a Hong Kong-registered ship last month suspected of supplying oil to the North in breach of international sanctions.

The revelations came as China denied claims by President Donald Trump it had allowed oil shipments to the North.

What happened with the Lighthouse Winmore?

But instead of going to Taiwan it transferred the oil to a North Korean ship and three other vessels in international waters on 19 October, South Korean officials were quoted as saying.

This defies a UN Security Council resolution imposed on 11 September.

The New York Times said the transfer was captured in US satellite photos, released by the US Treasury in November, although the Lighthouse Winmore was not named by the Treasury.

The Lighthouse Winmore was seized when it returned to Yeosu in November and remains in South Korea, South Korean officials said.

There is no evidence for this, as although the Lighthouse Winmore is Hong Kong-flagged, it was leased by a Taiwanese company, Billions Bunker Group Corp.

Taiwan's Presidential Office said the company that chartered the ship was not incorporated in Taiwan, but did not say whether the firm's owner or officials are Taiwanese.

The Chinese government said the accusations against it were "not consistent with the facts".

China handles about 90% of the North's foreign trade.

Why was Trump riled?

There has been increasing suspicion in Washington that Chinese ships have been secretly transferring petroleum to North Korean vessels at sea.

China has continued to deny this, saying it fully enforces UN resolutions against Pyongyang.

On Thursday, Mr Trump tweeted he was "very disappointed" with China, which he said had been "caught red-handed".

The tweet followed a report on the issue in South Korean newspaper Chosun Ilbo.

Quoting South Korean government officials, the report said the illegal ship-to-ship transfers had been filmed by US spy satellites about 30 times since October.

President Trump told the New York Times he had "been soft" on trade issues with China because he wanted its help on North Korea but was now threatening to end that.

He said: "Oil is going into North Korea. That wasn't my deal. If they don't help us with North Korea, then I do what I've always said I want to do."

Is oil part of the sanctions against the North?

Yes. Last week Beijing supported a US-drafted UN resolution that included measures to slash the North's petrol imports by up to 90%.

The 22 December sanctions also refer specifically to attempts by the North to procure prohibited goods.

The measures address the "illicit imports of petroleum through deceptive maritime practices by requiring Member States to seize, inspect and freeze any vessel in their ports and territorial waters for involvement in prohibited activities".

North Korea is already subject to a raft of sanctions from the US, the UN and the EU.

The latest round was sparked by the 29 November launch of a ballistic missile, which flew higher than any other the North has tested.

In a typically bellicose response, North Korea described the new sanctions as an "act of war".

Mr Trump has previously threatened to "totally destroy" North Korea if it launches a nuclear attack. North Korean leader Kim Jong-un has described the US president as "mentally deranged".

They have been imposed for more than a decade with little success.

In fact, North Korea has said fresh sanctions will only make it accelerate its nuclear programme. It has continued to test nuclear and ballistic missiles despite these recent examples of UN pressure: