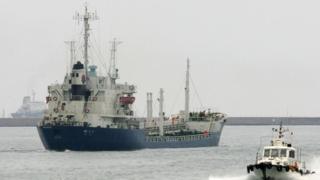 US President Donald Trump has said he's "very disappointed" with China following a report that it had allowed oil to be shipped into North Korea.

In a tweet, Mr Trump said China had been "caught red-handed".

He said there could never be "a friendly solution" to the North Korea crisis if oil was allowed to be exported to Pyongyang.

China earlier denied there had been any breaking of UN oil sanctions between China and North Korea.

Last week, Beijing supported a US-drafted UN resolution that included measures to slash the North's petrol imports by up to 90%.

Caught RED HANDED – very disappointed that China is allowing oil to go into North Korea. There will never be a friendly solution to the North Korea problem if this continues to happen!

Quoting South Korean government officials, it said the illegal ship-to-ship transfers had been filmed by US spy satellites about 30 times since October.

US officials did not confirm the report but one state department official quoted by Reuters suggested that such transfers could still be taking place.

Questioned about the reports of ship-to-ship oil transfers, Chinese defence ministry spokesman Ren Guoqiang told reporters: "The situation you have mentioned absolutely does not exist."

"We urge China to end all economic ties with the DPRK [North Korea], including tourism and the provision of any oil or petroleum products," he said.

In another development on Thursday, the UN Security Council denied international port access to four more North Korean ships suspected of carrying banned goods, AFP news agency reported. It would bring the total number of ships blocked by the UN to eight.

North Korea is already subject to a raft of sanctions from the US, the UN and the EU.

The latest UN measures came in response to Pyongyang's 28 November firing of a ballistic missile, which the US said was its highest yet.

In a typically bellicose response, North Korea described the new sanctions as an "act of war".

Mr Trump has previously threatened to "totally destroy" North Korea if it launches a nuclear attack. North Korean leader Kim Jong-un has described the US president as "mentally deranged".