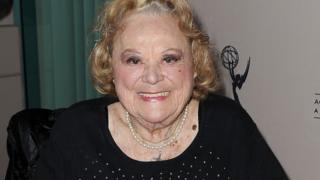 Rose Marie, the comedy actress and singer, who was a regular cast member on the Dick Van Dyke Show in the 1960s, has died at the age of 94.

Known for her quick wit, raspy voice and ever-present bow in her hair, her career began as a child performer when she was just three.

She remained a star for nine decades and also worked in music and theatre.

In 1946, she was booked by mobster Bugsy Siegel to open the first Las Vegas casino hotel, The Flamingo.

It is with broken hearts that we share the terribly sad news that our beloved Rose Marie passed away this afternoon. https://t.co/boHpy71Fjx pic.twitter.com/qv9w8pNuOz

Rose Marie Mazetta was born on 15 August 1923 in New York City, the same day that the Broadway musical Rose-Marie opened.

She got her first taste of showbiz at the age of three following an amateur contest that took her to Atlantic City, where she was billed as Baby Rose Marie.

She went on to sing for US Presidents Coolidge, Hoover and Roosevelt, and starred in some of the earliest talking films, including the 1929 short Baby Rose Marie The Child Wonder.

In 1946, she married musician Bobby Guy, a trumpeter for the The Tonight Show, and the couple remained together until his death in 1964.

Between 1961 and 1966, she starred in all five seasons of The Dick Van Dyke Show and quickly became a household name as quick-witted comedy writer Sally Rogers.

Her famous black hair bow, which she wore constantly, was inducted into the Smithsonian Museum in 2008, along with other items from her career.

Rose Marie received a star on the Hollywood Walk of Fame in October 2001.

At the age of 80, when asked if she planned to retire, she is reputed to have replied: "I've been in show business my whole life. Why start something new now?"

Paying tribute on Twitter, Star Wars actor Mark Hamill said: "Thanks for the all the laughs… Your timing always was… perfection"

Thanks for the all the laughs @RoseMarie4Real! So glad you could take your final bow while enjoying ANOTHER career high w/#WaitForYourLaugh & a new generation of fans who loved you. Your timing always was… perfection. #RIPRosie ❤️- mh https://t.co/OBcWdwvmk5

Sally Rogers was the patron saint of female TV comedy writers. Thank you, Rose Marie for making it seem like so much fun. https://t.co/1XHGiMXs1k

Throughout her life, Rose Marie was active in many charities, notably animal welfare. Her memoir, Hold the Roses, was published in 2002, and a new documentary about her, Wait for Your Laugh, premiered in November.

She also remained active on social media and was quick to offer support to the victims of movie producer Harvey Weinstein, writing on Twitter in October: "I've worked since I was 3, I'm 94…. finally women are speaking up to power. I have suffered my whole life for that. Don't stop."

I’ve worked since I was 3, Im 94. W/ Weinstein, finally women are speaking up to power. I have suffered my whole life for that. Dont stop https://t.co/sad20SYn2V