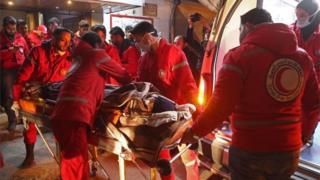 A final group of medical evacuees has left the besieged Eastern Gouta, near the Syrian capital, Damascus.

Twenty-nine people in urgent need of medical assistance have now been transferred to the capital in a deal with the Syrian government.

The Syrian authorities had agreed to accept urgent cases, in return for the release of government workers captured by the rebel group, Jaish al-Islam.

Two people on the original list died before they could be evacuated.

About 400,000 residents in the district have been under siege by government forces since 2013, and are running short of food and fuel.

The United Nations has a list of almost 500 people it says are in urgent need of medical care.

Mohamad Katoub, from the Syrian American Medical Society (SAMS), a medical relief organisation that supports hospitals in rebel-held Syria, said all the 29 evacuees were now out of the Eastern Ghouta.

The rest of 29 evacuees (18children, 6 women and 5 men) are out of #Ghouta now heading to Damascus.
11 of the initial approved were replaced with others because 2 died before approval and 9 were scared to go to government areas with no safety guarantees. #BreakGhoutaSiege

The 29 evacuees were brought out in three groups, on Tuesday, Wednesday and Thursday.

Eleven of those initially approved were replaced because two died and nine were afraid to go to government areas without security guarantees, Mr Katoub said.

On Wednesday a senior UN official, Jan Egeland, told the BBC he feared ill children were being used as bargaining chips.

Mr Egeland, who is the UN's humanitarian co-ordinator, said: "It is not a good agreement if they exchange sick children for detainees. That means children become bargaining chips in some tug of war. That shouldn't happen".

The main rebel group in the Eastern Ghouta, Jaysh al-Islam, said on Wednesday that the government had agreed to the evacuations in exchange for the release of 29 of its prisoners.

The Eastern Ghouta has been designated a "de-escalation zone" by the Syrian government's main allies, Russia and Iran, along with Turkey, which backs the opposition.

But hostilities intensified six weeks ago when the Syrian military stepped up attacks in response to a rebel offensive, reportedly killing dozens of civilians.

There are also severe shortages of food, fuel and medicines, and the cold weather is threatening to worsen the hardship.