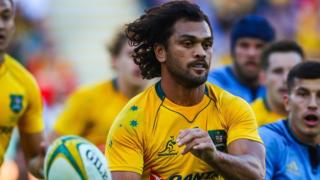 Australian rugby union star Karmichael Hunt has been charged with possessing drugs after police arrested him in Brisbane, reports say.

The Wallabies player was detained on Saturday, along with another man, after being found with a white powder, broadcaster ABC reported.

Rugby Australia said it had launched an investigation into the incident.

ABC said Hunt, 31, had been granted bail and was due to appear at Brisbane Magistrates Court on 29 January.

In a statement, Rugby Australia (RA) said it had been "made aware of an incident involving Wallabies and Queensland Reds back Karmichael Hunt in Brisbane".

"Rugby Australia takes all matters relating to the off-field behaviour of its players seriously and has commenced an investigation into the incident in conjunction with the Queensland Rugby Union," it added.

A former rugby league and Australian Rules football player, Hunt made his Wallabies debut against Fiji in June and signed a two-year contract extension with Rugby Australia last month.