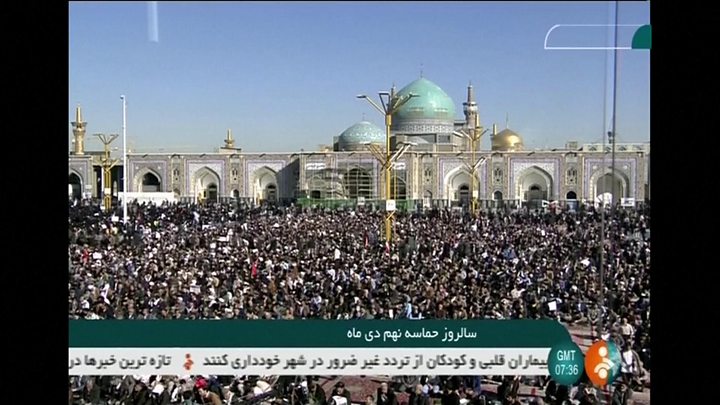 The Iranian government has told people to avoid "illegal gatherings" in the wake of two days of angry anti-establishment protests in the country.

Scores have been arrested in protests over corruption and living standards.

Small groups have continued to gather at Tehran University and elsewhere.

But Interior Minister Abdolreza Rahmani-Fazli urged people "not to participate in these illegal gatherings as they will create problems for themselves and other citizens".

The Iranian authorities are blaming anti-revolutionaries and agents of foreign powers for the outbreak of anti-establishment protest.

In the US, the Trump administration warned Iran overnight that the world was watching its response. Iran's foreign ministry called the comments "opportunistic and deceitful".

These official rallies were organised in advance of the anti-government protests, to mark the eighth anniversary of the suppression of major street protests.

The third day of protests took place only a few kilometres from where thousands have gathered for a pro-government rally in support of the supreme leader. The authorities hope these government-sponsored demonstrations will be a show of force.

The state-run television – a bastion of the Islamic hardliners in Iran – is reporting a massive turnout, focusing on the demonstrators' support for the supreme leader.

The authorities are taken aback by the spread of anti-government protests which they say are illegal and will be dealt with harshly. But they admit there is widespread discontent in the country, and not just about rising prices.

Some protests developed into broader demonstrations against the authorities, calling for the release of political prisoners and an end to police beatings. It was the biggest display of public dissent since huge pro-reform rallies in 2009.

Overall, the numbers said to be taking part range from less than 100 in some places to thousands in others – but demonstrations do not appear to be taking place on a massive scale.

A video spreading among Persian-language Twitter users on Saturday purports to show students at Tehran University calling for Supreme Leader Ayatollah Ali Khamenei to step down.

The hardline Fars news agency tweeted that "opportunists" were trying to raise unrest in front of the university. However AFP news agency reports that pro-regime counter-demonstrators appear to have outnumbered them.

The governor-general of Tehran said that any such gatherings would be firmly dealt with by the police.

Officials in Mashhad said the protest was organised by "counter-revolutionary elements", while state-run Channel One says "some opportunists tried to make British, American and Saudi media happy with norm-breaking slogans".

Its report added however that "the economic problems of the people are undeniable".

Many reports of peaceful protests by Iranian citizens fed up with regime’s corruption & its squandering of the nation’s wealth to fund terrorism abroad. Iranian govt should respect their people’s rights, including right to express themselves. The world is watching! #IranProtests