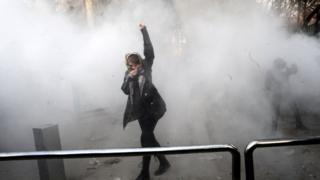 Iran protests: Reports of violence on third day of demonstrations

Some of the anti-government protests happening in Iranian cities have turned violent, footage appears to show.

Two demonstrators in Dorud in western Iran have sustained gunshot wounds, a video posted on social media and verified by BBC Persian shows.

Videos filmed elsewhere in the country show protesters setting fire to a police vehicles and there are reports of attacks on government buildings.

It is the biggest display of dissent since huge pro-reform rallies in 2009.

Demonstrators have ignored a warning by Iran's interior minister to avoid "illegal gatherings".

In the town of Abhar in northern Iran, demonstrators have set fire to large banners bearing the picture of Iran's Supreme Leader Ayatollah Ali Khamenei.

Meanwhile in Arak in central Iran, protesters have reportedly set fire to the local headquarters of the pro-government Basij militia.

In the capital Tehran, large numbers of protesters are converging on Azadi square, BBC Persian reports, with many police and security forces appearing to have withdrawn.

Earlier, protesters at Tehran University called for Ayatollah Khamenei to step down and there were clashes with police.

Thousands of pro-government demonstrators turned out earlier on Saturday for big rallies, organised in advance to mark the eighth anniversary of the suppression of the 2009 street protests.

As night fell, reports were still coming of protests in at least nine cities. There have been clashes with the police in some places.

The current protests began in the north-eastern city of Mashhad on Thursday over living standards and by Friday had spread to several major cities.

The Iranian authorities are blaming anti-revolutionaries and agents of foreign powers for the outbreak of protests.

The CEO of popular mobile messaging app Telegram said an Iranian account had been suspended for calling for attacks on police, after a complaint by Iran's communications minister.

In the US, President Donald Trump tweeted: "Oppressive regimes cannot endure forever, and the day will come when the Iranian people will face a choice. The world is watching!"

Demonstrators were reportedly heard on Friday yelling slogans like "The people are begging, the clerics act like God".

First Vice-President Eshaq Jahangiri has suggested that government opponents within Iran were behind the initial protests, state broadcaster IRIB reports.

The US State Department has urged all nations "to publicly support the Iranian people and their demands for basic rights and an end to corruption".