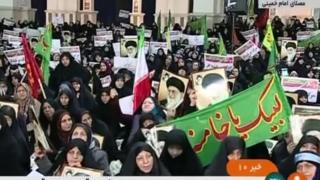 Thousands of pro-government demonstrators are attending rallies in Iran, after two days of anti-government protests.

Dozens of people have been arrested during days of protests over corruption and living standards, which the vice-president suggested were being organised by political opponents.

The US administration warned Iran that "the world was watching" its response.

Saturday's official rallies were organised in advance of the anti-government protests, to mark the eighth anniversary of the suppression of major street protests.

In 2009, masses came out in favour of the then-president, Mahmoud Ahmadinejad, in response to protests by reformists over a disputed election which returned him to power.

Meanwhile, the Iranian authorities are blaming anti-revolutionaries and agents of foreign powers for the protests.

'A show of force'

The authorities hope the government-sponsored demonstrations throughout the country will be a show of force. The state-run television – a bastion of the Islamic hardliners in Iran – is reporting a massive turnout, focusing on the demonstrators' support for the supreme leader, Ayatollah Ali Khamenei.

He has been the focus of much anger in the anti-government demonstrations of the past two days, with protesters calling on him and the clerical regime to go.

The protests have been the biggest expression of discontent in the country for several years. On social media, there are calls for more action later on Saturday in a number of towns and cities.

But signs are that the police may want to deal with any break out of fresh protests with force, although the authorities admit there is widespread discontent in the country, and not just about rising prices.

People there took to the streets to express anger at the government over high prices, and vented their fury against President Hassan Rouhani. Fifty-two people were arrested there for chanting "harsh slogans".

Some protests developed into broader demonstrations against the authorities, calling for the release of political prisoners and an end to police beatings. It was the biggest display of public dissent since huge pro-reform rallies in 2009.

Overall, the numbers said to be taking part range from less than 100 in some places to thousands in others – but demonstrations do not appear to be taking place on a massive scale.

Some reports suggest that calls for further protests on Saturday have already been heeded.

First Vice-President Eshaq Jahangiri has suggested that government opponents are behind the protests, according to comments reported by state broadcaster IRIB.

The governor-general of Tehran said that any such gatherings would be firmly dealt with by the police, who are out in force on the main roads.

IcetruckDecember 30, 2017
Like story:
tweet
Iran hard-liners rally as new protests challenge government
Putin voices hope for cooperation with US in letter to Trump