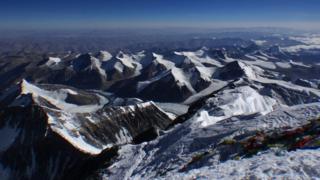 Nepal has banned solo climbers from scaling its mountains, including Mount Everest, in a bid to reduce accidents.

The new safety regulations also prohibit double amputee and blind climbers from attempting to reach the summit of the world's highest peak without a valid medical certificate.

A tourism official said the law had been revised to make mountaineering safer and to decrease deaths.

A record number of climbers have tried to climb Everest this year.

But among the record-breaking attempts, there has been the familiar tally of casualties.

The death toll so far this season stands at six, including 85-year-old Min Bahadur Sherchan, who died attempting to reclaim his title as the world's oldest person to reach the top.

World-renowned Swiss climber Ueli Steck, who was known as the "Swiss Machine", also died during a solo climb to a peak neighbouring Everest.

Under the new regulations, foreign climbers will have to be accompanied by a guide. The authorities hope this new rule will create more job opportunities for Nepali mountain guides.

The government's decision to ban double amputees and visually impaired climbers was criticised by some, but was later clarified to prohibit only those without medical dispensation.

In a Facebook post, aspiring Everest climber Hari Budha Magar, who lost both his legs when he was deployed in Afghanistan, said the move was "discriminatory" and an "injustice".

"I will be climbing Mt. Everest whatever the cabinet decides. Nothing Is Impossible," he said.

More than 200 people have died on Everest since 1920, with the vast majority of those deaths taking place since 1980.

Mountaineers on Everest die for a number of reasons – more than 20% are killed by exposure or acute mountain sickness.

According to statistics given to the BBC by the Himalaya Database in 2015, by far the highest number of people who died did so because of avalanches (29%), with falls being the next largest cause of death (23%).

IcetruckDecember 30, 2017
Like story:
tweet
Dozens of militants evacuated from southern Syria
At least 10 dead in Egypt after gunmen opened fire at Coptic church